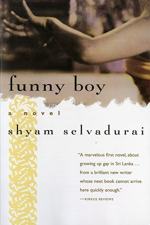 Shyam Selvadurai
This Study Guide consists of approximately 33 pages of chapter summaries, quotes, character analysis, themes, and more - everything you need to sharpen your knowledge of Funny Boy.

“Funny Boy” is a gay young adult novel by Shyam Selvadurai that recounts the childhood and teenage years of Arjie as he discovers he is gay while growing up in Sri Lanka in the late 1970s and early 1980s. When the novel begins, Arjie is seven years old, and realizes he enjoys spending more time with his female cousins than his male cousins. He wears women’s clothing and puts on women’s makeup as a child, leading his family to label him “funny” and to make fun of him. This deeply embarrasses Arjie’s parents, Appa and Amma, who insist he no longer play with the girls. As Arjie grows, his parents continue to do what they can to 'man up' their son, worried that he may turn out to be gay.

As Arjie grows, he comes to learn about the intolerance, racism, and unfairness of the world in which he lives. Racism exists between the former white, Dutch colonists and the natives of Sri Lanka, and between the Sri Lankans themselves by way of the Sinhalese and Tamils. Sri Lankan culture is very traditional, in which the fathers rule their families even though they have very little to do with the daily lives of their family members. Personal freedoms are very limited. Arjie’s youngest aunt, Radha, is steered away from a personal relationship to an arranged marriage. Arjie’s own mother could not marry a white Dutch colonial because her family did not approve. Meanwhile, war is on the horizon for the Sinhalese and Tamils. This leads Arjie’s father to fire a young man employed in his company who has ties to the Tamil Tigers, a terrorist group.

By the time Arjie is 13, he is beginning to notice other boys and men in a sexual way. His tendencies are noted by his father who decides that Arjie will now be sent to the very traditional, very proper Victoria Academy. Arjie’s father believes this will do him good in manning Arjie up, and in getting rid of his “funny” nature. At the school, Arjie experiences cruelty and discrimination by bullies because he is Tamil, and they are Sinhalese. Arjie is quickly defended by another boy named Shehan Soyza. Soyza and Arjie develop a quick friendship even though Arjie’s older brother warns him that Soyza is gay. The friendship between Soyza and Arjie soon becomes romantic, and then quickly becomes sexual. Arjie believes his choice of love is not wrong, and wonders why so many people look down on homosexuals.

Arjie soon has bigger things to worry about as riots break out against the Tamil by Sinhalese mobs. All across the country, acts of violence are committed against Tamils, including the burning of their houses and the killing of innocent Tamil citizens. Arjie’s own house, and the house of his grandparents, are torched. Arjie’s grandparents are trapped in their car and burned to death. Arjie’s parents decide that they must flee the country for their safety, and decide to move to Canada. Arjie is heartbroken by everything he has lost and must leave behind, including Soyza.

More summaries and resources for teaching or studying Funny Boy.