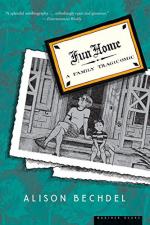 “Fun Home: A Family Tragicomic” is a graphic memoir (a work of nonfiction told in pictures) by Alison Bechdel which recounts her coming out as a lesbian, her father’s repressed bisexuality, and the relationship between Bechdel and her father. As a child, Bechdel always sensed something was off about her father. While some things her father did were manly, such as restoring the old house in which they lived, other things were very effeminate, such as his love of floral patterns and lace curtains. As a child, Bechdel embraced traditionally male attitudes – such as wanting to wear sneakers to a wedding – to compensate for her father’s lack of manliness. Likewise, Bechdel was never that close to her father because he was very impatient, quick to punish, and always enlisted Bechdel and her siblings in house restoration work.

While fixing up the house was her father’s passion, Bechdel’s father worked as a high school English teacher full-time, as well as a mortician in the family funeral home whenever there was a death. Bechdel and her siblings spent a lot of time at the funeral home, which they dubbed the “Fun Home”, because they always enjoyed themselves there – a stark contrast to what the funeral home was intended for, and because they tended to have more fun there than at home. To the rest of the town, Bechdel’s father and family represented the ideal American family, but her father’s dark secret made that representation nothing more than a sham.

Bechdel later learned that her father was bisexual, but in his married life moved heavily toward the homosexual end. Just as Alison came out to her parents as a lesbian when she was 19, her mother and father revealed her father’s sexuality to her. Alison’s mother explained that her father was molested as a boy by an older man, and that her father went on to have numerous relationships and affairs with men and even boys. Among them were her father’s high school students and the family’s babysitter. These things were at first devastating to Bechdel, but she later came to sympathize with her father due to her own homosexuality.

Bechdel’s coming out four months before her father’s suicide allowed for a renewed relationship between them, established over their common sexuality and their love of books. Throughout the memoir, Bechdel makes frequent reference to, and takes direct quotes from, numerous literary works in order to contextualize and provide relevance for her own life and her father’s life. She considers that her father was like Gatsby, an invented persona hiding a deeper secret, and that her father was also like Icarus, who was burned and plummeted to the Earth from flying too close to the sun. For Bechdel’s father, his life nearly came undone when he had a set of affairs with two young brothers, one of which reported her father out of jealousy. The case was narrowly dismissed when Bechdel’s father agreed to see a psychiatrist, and when the brothers reversed their statements and refused to say anything at all about their relationship with Bechdel’s father.

Ultimately, Bechdel’s parents’ marriage frayed beyond repair. Her mother simply could not cope with her father’s lies anymore, so she considered leaving him. Bechdel later came to believe that her mother asking for a divorce was the catalyst that led to her father’s suicide, for two weeks later he walked out in front of a truck. In the present, Bechdel attempts to make sense of her father’s death by comparing his life to her own through the course of her memoir. In the present, she also notes tragically that while her father was there to catch her in her plunge into homosexuality, no one was ever there to truly catch him.