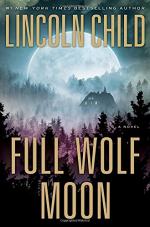 Lincoln Child
This Study Guide consists of approximately 70 pages of chapter summaries, quotes, character analysis, themes, and more - everything you need to sharpen your knowledge of Full Wolf Moon.

Dr. Jeremy Logan is a Yale history professor who also has a hobby as an enigmalogist who studies paranormal or supernatural phenomena. In order to finish a monograph on Medieval heresy that he has been working for several years, Jeremy takes a trip to a writer's resort in the Adirondack mountains called Cloudwater. When he arrives, the director of the resort, Greg Hartshorn, tells Jeremy that he knows of his hobby and that he hopes it will not bring any unwanted attention to Cloudwater. Jeremy reassures Hartshorn that will not be the case and he is only here to finish his monograph. However the next night Jeremy finds an old friend from Yale, Randall Jessup, waiting for him on the porch of his cabin. After catching up on what has happened in the years since they had last seen each other, Jessup asks a favor of Jeremy. There have been several murders over the last few months and all of them have been during the full moon. There are also rumors going around town about what caused the murders, which is why Jessup has asked for this favor. Jeremy reluctantly promises Jessup that he will ask around town the next day to check out the rumors.

The next day, Jeremy drives into the town of Pike Hollow and begins to gather information on the rumors that have been circulating around the town. He visits several different shops but it is only when he talks to the owner of Fred's Hideaway bar does Jeremy really learn about the elusive Blakeney clan. He had heard several other locals mention the clan but it is Fred who gives him the best information. He tells Jeremy that the clan has been blamed for several disappearances of children in the seventies even though there was no proof that they had done anything wrong. Fred then mentions that the clan has "tainted blood" and that they have an unnatural way of communing with nature (39).

The new information prompts Jeremy to make a visit to the clan's compound. He finds that it is difficult to get to their land when his car gets stuck in the ruts of the dirt road. When Jeremy finally comes to the compound wall, he sees it is made of twigs and baling wire that seems to have no entrance. He finds a hole large enough to look through but before he can completely survey the compound a gun barrel appears in the hole and Jeremy is warned away from the compound.

Jeremy heads to Randall Jessup's house for dinner. After dinner, Jessup explains to Jeremy what Fred meant when he said that the Blakeneys had tainted blood. The residents believe that the Blakeneys are werewolves. Jeremy thinks that idea is ridiculous and while Jessup does too, he cannot ignore the rumors, which is why he asked Jeremy to check out the rumors. Jeremy is still skeptical but Jessup gives him the case files and begs him to just look over them. Again, Jeremy reluctantly agrees.

It is two days before Jeremy looks at the case files and not even research on the internet can convince him that werewolves are real. Jeremy then runs into Greg Hartshorn who tells him about a poet named Harrison Albright who lives in the area. Jeremy goes to visit Albright and discovers an intelligent man who seems to know more about the Blakeneys than he is letting on. Another murder occurs. The report says that the murdered man was a lab assistant to Dr. Laura Feverbridge and that he was killed by a wolf. Captain Krenshaw tells Jeremy not to interfere with the investigation. A few days later, Jeremy investigates Dr. Feverbridge and her scientific site. Jeremy discovers Dr. Feverbridge's father had died a few months earlier and that they were working on a project dealing with the lunar effect.

The next day, Jeremy visited a suspect named Saul Woden with Jessup, the remaining assistant of Dr. Feverbridge, Kevin Pace, at his cabin. He tells Jeremy about some strange noises he has been hearing at night. While investigating them, Jeremy finds that the elder Dr. Feverbridge is alive and working on the lunar effect. Jeremy promises to keep the Feverbridge's secret even though it weighs on his conscious.

A few days later, Jessup inquires about Jeremy's visits to the Feverbridge site and then tells Jeremy that he has some leads on the case. Two days later, Jessup calls Jeremy and tells Jeremy to meet him at Fred's bar. However, Jessup never makes it there, as he comes upon a monster attacking another citizen and is killed trying to help. Jeremy encounters the scene on his way to Fred's and is deeply saddened by Jessup's death.

The next day Jeremy encounters another ranger who tells him Krenshaw wants to raid the Blakeney compound. While paying his respects to Jessup's wife, Jeremy discovers some of the clues in Jessup's office. Jeremy then turns to Harrison Albright, who takes him to the Blakeney compound where Jeremy discovers the Blakeneys have some genetic mutation that affects certain members during the full moon. Jeremy also learns that the elder Dr. Feverbridge had visited their compound and taken blood from the most afflicted member, Zephraim.

The following day, Jeremy confronts the Feverbridges about their work. It is late in the day when he does this and the sun sets, revealing that the elder Dr. Feverbridge has used a serum on himself and he now undergoes a transformation during the full moon. Feverbridge dashes out of the lab in a fury. Luckily, Jeremy had called Albright to meet him at the Feverbridge's and the two men chase after the elder Feverbridge.

Feverbridge's transformation is horrendous and he ends up tricking Alrbight and Jeremy by doubling back on them. Albright is seriously wounded, but Jeremy manages to draw Feverbridge away before he can kill Albright. They find themselves on the top of Madder's Gorge, where Feverbridge had supposedly died months earlier. Just as Feverbridge is about to kill Jeremy, Laura appears and accuses him of lying to her about his violent tendencies over the last few months. Her words strike a cord within him, and Feverbridge makes the decision to step off the top of the gorge, killing himself.

Two months later, Jeremy again drives through the Adirondack mountains and visits Harrison Albright on his way to a Medieval conference in Quebec. Jeremy learns that Laura Feverbridge has been given a light sentence for the indirect part she played in the deaths and that the case has been taken away from Krenshaw and given to someone higher up in command, possibly even the CDC. Albright also tells him that the Blakeneys have been left alone and are not into the investigation. Jeremy thinks that it is a shame their condition will never be studied but he is glad the clan is not going to be disturbed. Jeremy then tells Albright that he feels guilty for keeping the Feverbridge's secret and not turning them in right away. Harrison then reminds him that it is apart of his occupation and that it will always put him in dilemmas like that. Reflecting on that statement, Jeremy realizes that Harrison is right.