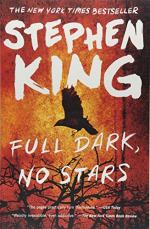 Stephen King
This Study Guide consists of approximately 56 pages of chapter summaries, quotes, character analysis, themes, and more - everything you need to sharpen your knowledge of Full Dark, No Stars.

This detailed literature summary also contains Quotes and a Free Quiz on Full Dark, No Stars by Stephen King.

The following version of this book was used to create this study guide: King, Stephen. Full Dark, No Stars. Simon and Schuster, 2010. Kindle.

The collection consists of four separate novellas. “1922” is the first story, and it is presented in the form of a letter than the narrator, Wilfred, writes from a hotel room in Omaha in 1930. He tells the reader that he murdered his wife, Arlette, in 1922, and he coerced his 14-year-old son, Henry, into helping him commit the crime and get away with it. In the narrative present, Wilfred is in a hotel full of rats, writing his confession in order to prepare to kill himself because he is plagued by guilt. In 1922, Arlette had inherited 100 acres from her father. She wanted to sell her land and move to the city after divorcing Wilfred so that she could live an independent life. Wilfred did not want her to go, and he did not want the land to be sold to a greedy corporation that intended to build a slaughterhouse, so he decided the only thing he could do would be to kill her. He psychologically manipulated his young, naïve, and pious son into helping him. After they killed Arlette and hid her body in a well full of rats, they were successful in evading the law. But the rats continued to plague Wilfred. Henry got his girlfriend Shannon pregnant, but there was no money for a marriage, so her wealthy father sent her to Omaha to give the child for adoption. Henry ran away from home to find Shannon. Wilfred was bitten by another rat and got an infection that turned into a near-deadly fever. Arlette’s ghost came to him and prophesied the story of Henry and Shannon. They ran away from Omaha together, heading for California. Along the way, they robbed dozens of establishments. Their luck finally ran out, and Shannon was shot. Henry took her to a shed, where she and their baby died. He killed himself and was shipped back to Wilfred with rat bites all over his face. Wilfred lost his farm and moved to Omaha, where the rats continued to haunt him and, eventually, they kill him. In the end, there is a newspaper article claiming that Wilfred committed suicide by biting himself to death.

“Big Driver” is narrated by a close third person past narrator on Tess. Tess was invited to speak at a library in Chicopee by Ramona. After her speech, Ramona recommended that Tess take a shortcut. While she was driving, Tess hit a pie of woof covered in nails. She pulled to the side of the road. A man approached and offered to help her change her tire, but then he attacked her and raped her inside an abandoned store. Thinking she was dead, he left her in a pipe full of other corpses. Tess waited for him to leave and then escaped. When she got home, she decided that she wanted to get revenge. She researched him and found out where he lived. She also found out that Ramona was his mother, and had likely set Tess up. Tess went back to Chicopee and confronted Ramona. When she admitted the truth, Tess killed her, then went to kill her rapist. She accidentally killed his brother instead, and then she killed him. Feeling terrible about the accident, she considered killing herself, but then she discovered that the brother was involved as well, so she went back home content with her actions.

“Fair Extension” is also narrated by a close third person past narrator on Streeter. Streeter pulled to the side of the road to throw up because of his chemo. When he looked up, he noticed a roadside stand. He approached and met the attendant, Elvid. Elvid offered to take away his cancer and place it upon someone Streeter hated. Streeter said that he hated his best friend, Tom, and then agreed to the deal. Streeter’s cancer evaporated and he started feeling wonderful. Tom’s wife, Norma, got breast cancer and died. A series of horrible events occurred next, including Tom losing all his money, Tom’s oldest son going to jail, Tom’s granddaughter dying, and Tom’s youngest son getting into an accident that caused extensive brain damage. Meanwhile, Streeter’s life and family were blessed with happiness and success. In the end. Streeter was glad that he made the deal.

“A Good Marriage” is also narrated by a close third person past narrator on Darcy. Darcy had been married to Bob for 27 wonderful years. She was watching television when the remote died. Bob was out of town for an estate sale as he frequently was because of his side business as a coin collector. She went into the garage to get batteries, but instead she found a box containing pornography. She put it back, but then noticed a hiding space beneath the garage table. When she looked inside, she found the ID cards of a young woman who had been murdered by a serial killer named Beadie who always tortured, raped, and mutilated women before sending their ID cards to the police along with a taunting note. Horrified, Darcy researched Beadie and saw that his movements aligned with her husband’s. Bob called and heard something strange in her voice. He came back from his trip early and confessed that he was Beadie. He told her that he would never kill again. He was glad she knew, so she could finally help him stop. Darcy agreed to keep the secret, but over the next few weeks she realized she could not live with the truth. She pushed him down the stairs and then suffocated him before calling the police.

More summaries and resources for teaching or studying Full Dark, No Stars.