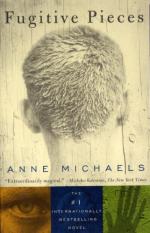 Anne Michaels
This Study Guide consists of approximately 52 pages of chapter summaries, quotes, character analysis, themes, and more - everything you need to sharpen your knowledge of Fugitive Pieces.

This detailed literature summary also contains Topics for Discussion and a Free Quiz on Fugitive Pieces by Anne Michaels.

Fugitive Pieces by Anne Michaels is partly a memoir by the poet Jakob Beer about his life as a Holocaust survivor and reflections on Jakob's poetry by a scholar, Ben, who is indebted for helping him understand his Holocaust-surviving and scarred parents. It is about struggling to cope with the past.

Fugitive Pieces is divided unequally into two parts. In Book I, sixty-year-old poet/scientist Jakob Beer looks back over his life from the time he escapes death at the hands of the Nazis until he succeeds in writing poetry, splitting his time between Toronto, Ontario, Canada, and his adoptive home during World War II, Greece. He owes his survival after his family is killed and his rich education to a Greek geologist, Athanasios (Athos) Roussos, who happens upon him in the mud of Poland and spirits him off to Greece. There he opens to Jakob all of the mysteries of the universe. After the war, during the brutal Greek civil war, they emigrate to Canada, where Athos teaches, Jakob studies, and begins a career as a translator.

Jakob marries twice. The first union fails because he is insufferably obsessed with his sister Bella's fate and all of the lives tragically cut short by the Nazis. Jakob wants to write poetry but cannot produce fruit until his second wife plants love in his soul. Around 1970, Jakob and Michaela move to Greece and he begins writing in the Roussos family home on Idhra Is. There, he produces the memoir that constitutes Book I.

Book II is told by a young scholar in Toronto, Ben, who meets Jakob and Michaela at a party. Ben's second wife, Naomi, is instantly attracted to Jakob. After Jakob's tragic death in Athens in the summer of 1992, Ben addresses to him meditations on how Jakob's poetry has helped him deal with his own parents, Holocaust survivors. Ben chronicles the burden of growing up in a paranoid, foreign home and gradually breaking free. Ben edits Jakob's writings for publication and studies weather in relation to literature and history. Ben's marriage is dying when he goes to Idhra to rescue Jakob's journals. In the Roussos ancestral home, Ben comes to understand how Jakob can write about horrors, finally having the love of a good woman. Ben hopes that he can return to his abandoned and betrayed wife and find the love that he needs.