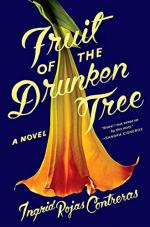 Ingrid Rojas Contreras
This Study Guide consists of approximately 84 pages of chapter summaries, quotes, character analysis, themes, and more - everything you need to sharpen your knowledge of Fruit of the Drunken Tree.

Fruit of the Drunken Tree Summary & Study Guide includes comprehensive information and analysis to help you understand the book. This study guide contains the following sections:

This detailed literature summary also contains Quotes and a Free Quiz on Fruit of the Drunken Tree by Ingrid Rojas Contreras.

The following version of this book was used to create this study guide: Rojas Contreras, Ingrid. Fruit of the Drunken Tree. Doubleday, a division of Penguin Random House LLC, New York, NY. 2018. First edition. The story is told primarily from the first-person perspective of teenaged narrator Chula, but there are frequent interjections written in the first-person perspective of Petrona, a young woman who becomes a housekeeper / maid for Chula’s relatively well-to-do family.

In the prologue-like Chapter 1, Chula describes the effect of receiving a letter and a photograph from Petrona, a response to a letter that she had written some time before. Consideration of what Petrona’s life seems to have become since Chula and her family left Colombia leads Chula to recall the circumstances of Petrona’s arrival in the family’s household (as a servant / assistant to Chula’s volatile mother) and how over time, the two young women developed a friendship based as much on secrets as on actual emotional connection.

Chula’s descriptions of day-to-day life in her family’s home include references to her mother’s flirtatiousness, her father’s frequent long absences for work, and awareness of Colombia’s bigger-picture, socio-economic circumstances – specifically, the country’s essentially being held hostage by armed conflict between the government, powerful drug cartels led by the notorious Pablo Escobar, guerilla armies fighting to bring economic equality, and paramilitary groups unofficially fighting to defend the country from guerilla attacks. Deadly violence associated with these conflicts leaves a mark on the mind and spirit of the impressionable young woman, who is particularly haunted by the sight of the leg of a young girl, blown off the girl’s body in a bomb attack but still wearing a shoe.

Meanwhile, several chapters in which Chula describes her life and circumstances each have a second part that focuses on details of Petrona’s experiences with Chula’s family, and in her own life. They describe her family’s life in what amounts to a slum, or squatter’s community; how the violence of the country affects them; and how she engages in increasingly desperate activities in order to earn a little extra money and bring a little extra safety into the lives of her asthmatic mother, delicate younger sister, and increasingly frustrated younger brothers, one of whom is eventually killed as a result of his involvement in one of the guerilla groups.

In the aftermath of her brother’s death, and as she is developing a friendship with Chula, Petrona is visited by a young man named Gorrion, who claims to have been a friend of her brother, who claims to not be a guerilla himself, and who claims to be determined to protect Petrona and her family. Petrona finds herself charmed by him and, while Chula and her family are away, lets him stay with her in Chula’s family home and have a party there. Chula accidentally discovers what is going on, but resolves to keep what Petrona is doing a secret: she thinks Petrona is in danger and staying in the house for her own safety.

Once Chula and her family return home, and after Chula’s mother makes an effort to improve Petrona’s life, Chula and Petrona are almost kidnapped by Gorrion with the help of Petrona, who is immediately fired. Shortly afterwards, Chula’s father is himself kidnapped and held hostage, a circumstance that bankrupts Chula’s family and sends her, her mother, and her sister to America in the hopes of a freer, safer life.

Years pass as Chula and her family establish a new life in the United States. They are eventually reunited with Chula’s father, who is so changed that Chula does not recognize him. She is eventually convinced, however, and begins the process of rebuilding her relationship with him. Meanwhile, she reaches out to Petrona by letter. Petrona writes back, and sends a photograph of herself and Gorrion with their young son. On her mother’s advice, Chula burns both the letter and the photograph, Chula coming to believe that keeping Petrona’s life and situation a secret will ultimately be the best thing for her.

In her closing narration, Petrona describes making peace with her painful past, and giving as much information about that past (i.e. the letter and the photograph) as she feels she can safely give to Chula. Each of the young women end their respective sides of the narrative convinced that not knowing all of the truth will be better for the other.

More summaries and resources for teaching or studying Fruit of the Drunken Tree.

Fruit of the Drunken Tree from BookRags. (c)2022 BookRags, Inc. All rights reserved.