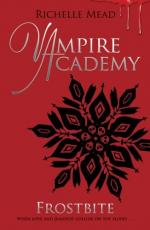 Richelle Mead
This Study Guide consists of approximately 27 pages of chapter summaries, quotes, character analysis, themes, and more - everything you need to sharpen your knowledge of Frostbite.

This detailed literature summary also contains Topics for Discussion and a Free Quiz on Frostbite by Richelle Mead.

Frostbite is the second novel in the Vampire Academy Series by Richelle Mead. In this novel, Rose Hathaway is still trying to catch up on her studies after going into hiding for two years with her best friend Lissa. On a trip to take an examination important to her studies, Rose and her advisor, Dimitri, discover the murders of a royal Moroi family and their guardians. These deaths spark fear throughout the Moroi community, causing St. Vladimir to decide to take all its students to a ski resort over the winter break rather than allow them to travel to their homes. Frostbite is a novel of friendship, love, and relationships that will entertain as it take readers on a new adventure in the world of vampires.

Rose has nearly caught up on her studies after taking two years off to protect Lissa from Victor Dashkov. He is a Moroi royal who wanted to kidnap Lissa so that she could use her powers to heal him. Rose has to take her Qualifiers, a test that all guardians in training must pass in their junior year. Special arrangements have been made for Rose since she was not at school her junior year. Rose and her advisor, Dimitri, make the drive alone together. This makes Rose happy because she has been in love with Dimitri since before Dashkov placed a lust spell on the two of them months ago. Unfortunately, Dimitri is older than Rose and he is to be Lissa's guardian with her, therefore they cannot pursue their feelings for one another.

When Rose and Dimitri arrive at the home of the guardian who is to administer the Qualifier to Rose, they discover that the guardian and the family of royal Moroi he was protecting have all been killed by their enemy, the Strigoi. More disturbing still is the fact that someone has placed a silver stake in the yard, something the Strigoi cannot touch because of its magic, suggesting humans are working with a large and rare group of Strigoi.

Back at school, Rose learns that the deaths of this royal Moroi family has left the Moroi community in fear. For this reason, the school has decided that rather than allow the students to travel to their various homes for the winter break, they will transport everyone to a ski resort. Rose is excited at first until her mother shows up at the school. Rose's mother is a star guardian who all but abandoned Rose five years previously. They have an adversarial relationship that only grows more difficult when a discussion about Rose's father causes her mother to lose control and give her a black eye during a training session.

Rose learns on Christmas Day that Dimitri has been given the offer of becoming guardian to a member of the Ozera royal family. Not only this, but the woman Dimitri is to guard, Tasha, hopes that he might want to father children with her someday. Rose is filled with jealousy, causing her to act rashly around Dimitri.

At the ski resort, Rose spends time with Mason, a fellow student who has had a crush on her for a long time. Rose hopes that Mason can help her forget Dimitri, but he only makes her miss Dimitri more. At the same time, Rose meets Adrian Ivashkov, a member of a notorious Moroi royal family. Adrian shows a great deal of interest in Rose, but also in Lissa.

Rose learns from Dimitri that the guardians have tracked a group of Strigoi who are believed to be responsible for two attacks on Moroi royal families. Rose tells this information to Mason despite knowing that he is anxious to take action against the Strigoi. When Rose learns that Mason has disappeared with two others from the school, she takes Lissa's boyfriend, Christian, and goes after them. After locating her friends, Rose tries to rush them back to the ski resort before dark, but does not anticipate the humans working with the Strigoi.

More summaries and resources for teaching or studying Frostbite.