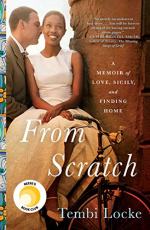 Tembi Locke
This Study Guide consists of approximately 47 pages of chapter summaries, quotes, character analysis, themes, and more - everything you need to sharpen your knowledge of From Scratch.

Discuss the role and significance of food in From Scratch.

Food is representative of culture and traditions, as well as family connections and intimacies. Cooking food and sharing meals is a symbol of love and emotional support as well as physical sustenance.

Discuss some of the challenges Saro and Tembi face in their intercultural relationship.

Tembi and Saro's relationship initially leads to an estrangement from his parents because Saro chose to marry outside their Sicilian culture. It takes time and persistence for them to overcome this estrangement and forge new relationships with his family.

Explain the significance of the phrase "Finding Home" in the book's subtitle.

More summaries and resources for teaching or studying From Scratch: A Memoir of Love, Sicily, and Finding Home.

From Scratch: A Memoir of Love, Sicily, and Finding Home from BookRags. (c)2022 BookRags, Inc. All rights reserved.