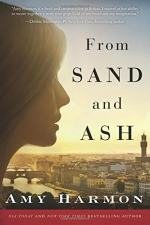 Harmon, Amy
This Study Guide consists of approximately 49 pages of chapter summaries, quotes, character analysis, themes, and more - everything you need to sharpen your knowledge of From Sand and Ash.

From Sand and Ash Summary & Study Guide includes comprehensive information and analysis to help you understand the book. This study guide contains the following sections:

This detailed literature summary also contains Quotes and a Free Quiz on From Sand and Ash by Harmon, Amy.

The following version of this book was used to create the guide: Harmon, Amy. From Sand and Ash. Lake Union Publishing, 2016.

From Sand and Ash is divided into 26 chapters as well as a prologue and epilogue. The book is primarily in chronological order from Eva and Angelo’s childhoods in the early 1930s until the epilogue in 1955. The narrative point of view changes between characters, most often between Eva and Angelo.

In the prologue, which takes place in 1944, a Catholic priest named Angelo, who has been beaten and left for dead by German soldiers, attempts to return to the Church of Santa Cecilia, where he seeks the fate of a woman named Eva. He collapses upon arriving and a man named Mario tells her that she has been captured and has been missing for three days.

Chapter 1 then returns to 1929 in Florence as Camillo Rosselli, a Jewish Italian man, explains to his daughter Eva that a boy named Angelo would be coming from America to live with them, as his father believed the seminary in Florence would be a good position for him. Angelo arrives, and he and Eva quickly strike up a close friendship. As the months and years pass, they grow more comfortable with one another, and Angelo shows her his leg, which is partly missing, in return for Eva reading her diary to him. Although he is Catholic and she is Jewish, they resolve to be friends.

Though Eva later confesses she though they would someday marry, Angelo joins the seminary to become a priest in the Catholic Church. Laws in Italy pass restricting the rights of Jews to own businesses and to marry non-Jewish people. Once, while on break from seminary in 1939, Angelo joins Eva and her family at the seaside and the two share a passionate kiss. Camillo later tells Angelo that he knows about Eva and his feelings for each other, but also believes Angelo can save his family from the impending trouble for Jewish people by using his position as a priest. Resolved to stay in the ministry despite his feelings for Eva, Angelo returns to the seminary and graduates, soon moving to Rome.

Camillo decides that he must go to Austria in an attempt to save a friend who had been sent to Auschwitz, though Eva begs him not to go. Due to worsening conditions for Jews, Angelo asks Eva to come with him to Rome so that he can protect her along with other Jewish refugees. He places her in a convent at the Church of Santa Cecilia. One day, after witnessing a German soldier commit suicide by jumping in front of a street car, Eva finds employment at the German headquarters as a secretary. Despite Angelo’s protests, she begins to use her position to filter information and resources to the resistance. She eventually finds a barrel of gold previously confiscated from the Jewish population, and steals bits of it at a time in order to finance Angelo’s secret refugee operations.

Eventually Eva’s boss, Captain von Essen, hosts a gala for Heinrich Himmler and other senior Nazi officials at a hotel in Rome, and, knowing that Eva can play violin, insists she play the concert. She performs but overhears plans to raid the Church of Santa Cecilia for hidden Jews that very night. Angelo departs quickly to warn them, and a woman recognizes Eva from years ago in Florence and outs her as a Jew to Greta von Essen, the Captain’s wife.

The Germans search the church, but Angelo manages to hide the refugees inside. Angelo returned to the hotel, where Eva had a room. Overcome with emotion, the two make love for the first time. A few days later, Eva returns to work only to be arrested by the Captain, whose wife informed him of Eva’s background. Angelo arrives and is also arrested and tortured for the location of the hidden Jews in Rome. He does not give up their location, and is taken outside of Rome to be executed. The soldiers assigned to execute him do not want to execute a priest, however, and so let him go, which brings the reader to the point where the prologue began.

Meanwhile, Eva was taken and put on a train bound for the Bergen-Belsen labor camp in Germany. She manages to escape near Frankfurt, however, and makes her way to a Belgian town called Bastogne. Angelo, determined to find Eva at Bergen-Belsen, enlists as an American citizen with the American Army, which has by now recaptured Rome. He goes to fight in the Ardennes forest, and by chance his unit is part of a battle against a German division in Bastogne. Angelo finds Eva and discovers she is pregnant and in labor with his child. He delivers the child and the two are united again, this time with their infant son. They return to Rome, then go to Florence again after the war where they live for a few years before moving to America. The epilogue concludes with a diary entry from Eva dated 1955, in which she discusses their new life and four sons.

More summaries and resources for teaching or studying From Sand and Ash.

From Sand and Ash from BookRags. (c)2022 BookRags, Inc. All rights reserved.