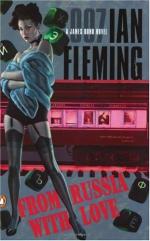 Ian Fleming
This Study Guide consists of approximately 35 pages of chapter summaries, quotes, character analysis, themes, and more - everything you need to sharpen your knowledge of From Russia With Love.

From Russia With Love Summary & Study Guide includes comprehensive information and analysis to help you understand the book. This study guide contains the following sections:

This detailed literature summary also contains Topics for Discussion and a Free Quiz on From Russia With Love by Ian Fleming.

From Russia With Love by Ian Fleming is a novel centered around the infamous British MI5 spy, James Bond. In this installment of the Bond saga, Bond is targeted for elimination by the Russian intelligence agencies. To lure Bond to his death, the Russians have enlisted the help of a beautiful woman to seduce the famous spy. As Bond falls in love with this gorgeous woman, he allows his defenses to slip, making himself vulnerable to the Russian plot. From Russia With Love is more romantic than the previous Bond novels giving the reader unique insight into this much loved character.

Grant, a killer for the secret killing machine of the MGB, is lounging by the pool when he gets word that he is needed in Moscow. Grant rushes to Moscow at the same time the leaders of the various Russian intelligence agencies are meeting with the leader of SMERSH. They must choose an intelligence agency of an enemy country to attack. They debate several and finally decide on England. Within the English Secret Service is an agent named Bond who has interfered with several Russian projects in the past and is popular with his fellow spies. They decide if Bond were killed and his reputation ruined, it would offer a deep blow to his agency.

A death warrant is issued and a plan is designed. The Russians use a beautiful woman to lure Bond out of London. The lure works and Bond rushes to Istanbul in order to help this woman defect. The woman, Tatiana Romanova, has declared that she wants to defect to England because she is in love with Bond, a man she knows only by reputation. In exchange for Bond coming personally to help her, Tatiana has agreed to hand over a coding machine that the British would really like to have.

In Istanbul, Bond meets Darko Kerim, the leader of the British substation in Istanbul. Bond likes this man on sight. The two men spend a great deal of time together over the next few days because Kerim believes Bond should not sit in one place and wait for Tatiana to approach him. During this time, Bond not only sees more of Istanbul than he ever wanted, but he becomes involved in a plot against Kerim by a local gang who work for the Russians. This plot has nearly killed Kerim once with a bomb and they attack Bond and Kerim a second time while they are visiting a gypsy friend of Kerim's. Kerim decides he must take out their leader in order to stop these attacks. Bond goes with Kerim and watches as he executes this man in cold blood.

Tatiana approaches Bond that night. Tatiana is in Bond's bed naked when he comes back to the hotel. Bond and Tatiana spend the night together after deciding how to proceed. Bond wants to get the machine and take Tatiana to Britain by plane, but Tatiana insists on the Orient Express. This choice makes Bond uneasy, but he likes Tatiana and decides to indulge her. Bond talks Kerim into taking the train as well. Kerim immediately recognizes the three Russians they saw in a meeting a few days before on the train and decides to get them off. Kerim bribes a few officials and has two of these men off the train, making Bond feel more relaxed about the situation. However, Kerim is still nervous and wants Bond to leave the train and fly to London. Bond refuses.

The next morning, Kerim is found murdered. Bond decides to stay on the train, however. A man boards the train and Bond thinks he is another MI5 agent. The man agrees to share the guard duties and stays with Bond and Tatiana in their stateroom. However, the man is Grant, the assassin, and the next morning he allows his identity to be known. Bond is told that it is a plan to kill him and make it look as though he killed Tatiana and then killed himself over a scandal in which Bond used Tatiana to get the code machine. Bond waits for the killer to make his move and then he attacks, getting the better of Grant and killing him instead. Bond then goes after Grant's boss, Klebb, and manages to trap her. However, Klebb gets the better of Bond, poisoning him before anyone notices what has happened.