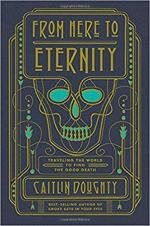 From Here to Eternity: Traveling the World to Find the Good Death Summary & Study Guide

From Here to Eternity: Traveling the World to Find the Good Death Summary & Study Guide Description

From Here to Eternity: Traveling the World to Find the Good Death Summary & Study Guide includes comprehensive information and analysis to help you understand the book. This study guide contains the following sections:

This detailed literature summary also contains Topics for Discussion on From Here to Eternity: Traveling the World to Find the Good Death by Caitlin Doughty.

The following version of the book was used to create this study guide: Doughty, Caitlin. From Here To Eternity: Traveling The World To find The Good Death. W.W. Norton & Company, Inc., 2017. Hardcover First Edition.

Caitlin Doughty is a mortician who runs a nonprofit funeral home in Los Angeles. Her work and philosophical approach to deathcare contrasts many of the accepted conventions in the United States. For example, she is advocates greater involvement of families in the care of bodies and has a progressive attitude toward conventions like embalming which is not, contrary to popular belief, necessary. A trip to Belize that Doughty took just after opening her funeral home five years ago introduced her to some of the world's very different approaches to death. Doughty is struck by the intimacy between the dead and their loved ones in Belize, which contrasts Western practices in which the commercialization of the industry forces mourners to "navigate purposeful obfuscations after every loss" (13). Doughty argues that "we need to reform our funeral industry, introducing new practices that aren't so profit-oriented, and that do more to include the family" (14). To do so, she encourages us to question our own practices and to explore those of others with open-mindedness.

First, Doughty travels to Crestone, Colorado where a small community has established one of the Western world's two shared outdoor pyres for cremation. The pyre is run by the Crestone End of Life Project which subverts conventional and commercial American funeral practices. This prompts Doughty to explore process of cremation in more detail by looking at history, current convention, the Crestone Project, and Hinduism.

Next, Doughty goes to Tana Toraja, Indonesia where a local ethnic group is having a traditional death ceremony. Doughty visits burial caves before joining the local community at a funeral which includes animal sacrifices as well as a sermon by a priest. According to Torajan tradition, there is often a long period between death and burial in which the body is kept in the home, sometimes for many years. In another traditional ritual, members of the community dig up the mummified bodies of their loved ones and spend time cleaning them, dressing them, and taking photographs with them. For Torajans, their rituals provide "a meaningful way to stay connected to their dead." (76).

In Mexico, Doughty explores the evolution of the Day of the Dead festival. Doughty travels with a friend and colleague named Sarah Chavez who finds the direct relationship with death displayed during the festival to be a comfort to her after the loss of her unborn son. This prompts Doughty to explore the treatment and expectations surrounding grief in the United States as compared to Mexico. At the same time, she compares Sarah story to that of Mexican artist Freida Khalo who also lost children in the womb.

In North Carolina, Doughty spends time at the Forensic Osteology Research Stations at Western Carolina University where researchers are attempting an eco-burial initiative in which human bodies are quickly turned into compost. This project fits in with a rising trend in the desire for eco-burials, but as Doughty discoveries, the exact method for effectively decomposing a body a naturally and quickly still needs to be perfected.

While in Barcelona, Doughty examines the prevalent use of glass in Spanish death rituals which keeps the body behind a transparent barrier. This allows mourners to face the reality of death without ever getting too close. She also discusses how the tradition of burying bodies within twenty-four hours leaves both citizens and funeral workers with the feeling that the death process is too rushed. She also addresses the issue of "grave recycling" (145) which is common in Europe where available burial space is very limited, as well as how Spain's current burial practices are attempting to be more environmentally friendly without fully succeeding.

In Japan, Doughty explores how technology can be used to enhance traditional death rituals and burial practices. She visits several avant-guard burial sites that use cutting-edge technology to house the dead most effectively. She also visits a "corpse hotel" which gives family members the time and freedom to visit with the body of their loved one outside the constraints of a traditional wake. While Japanese deathcare is similar to Western deathcare in many ways, she emphasizes the differences in which the families are more involved in caring for the remains of their loved ones more directly.

Back home in California, Doughty returns to her funeral home where she conducts a natural burial, burying a body in a shroud out in the desert. The idea of a body disappearing into the earth after death appeals to Doughty but, for herself, she prefers an alternative eco-death. For her own body, Doughty would like to emulate a Parsi funeral in which the body is, after an elaborate ritual, left to be consumed by vultures. Doughty considers this way of returning a body to the earth and nourishing the planet to be "the safest, cleanest, and most humane way of disposing of corpses" (224). However, the reality is that the laws around deathcare in the United States make this option unlikely for her.

In the Epilogue, Doughty emphasizes how Western society has created a culture of death avoidance that does not allow family and friends to grieve and mourn properly. Doughty calls upon all death professionals from funeral directors to hospital workers to create better spaces where the grieving can be better supported and mourners are held by the community. Doughty encourages readers to "show up" (235) and reclaim their involvement in death rituals in order to grieve and heal more effectively.

From Here to Eternity: Traveling the World to Find the Good Death from BookRags. (c)2022 BookRags, Inc. All rights reserved.