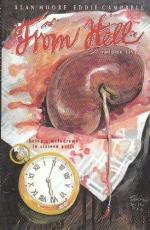 From Hell: Being a Melodrama in Sixteen Parts Summary & Study Guide

Alan Moore
This Study Guide consists of approximately 42 pages of chapter summaries, quotes, character analysis, themes, and more - everything you need to sharpen your knowledge of From Hell.

From Hell: Being a Melodrama in Sixteen Parts Summary & Study Guide Description

From Hell: Being a Melodrama in Sixteen Parts Summary & Study Guide includes comprehensive information and analysis to help you understand the book. This study guide contains the following sections:

This detailed literature summary also contains Topics for Discussion and a Free Quiz on From Hell: Being a Melodrama in Sixteen Parts by Alan Moore.

In Autumn of 1888 a series of five brutal murders shocks London. The victims, all poor female prostitutes, are murdered and then mutilated. The murders are attributed to Jack the Ripper, and the real identity of Jack the Ripper is William Gull, the Royal physician and a high-ranking Freemason, working on explicit orders from Queen Victoria to murder specific women to cover up an illicit affair carried on by her grandson Prince Albert Victor.

Prince Albert Victor leads a life steeped in perverse pleasures and sexual liaisons. Guided by his chaperon, Walter Sickert, an incognito Albert meets Annie Crook, a shop-girl, develops a sexual relationship with her, and then marries her in an Anglican church. She delivers a baby and then Queen Victoria learns of the entire illicit situation. Victoria's reaction is strident and Albert is effectively kidnapped from his incognito life. The infant daughter is sent into anonymity and Crook is spirited away to an insane asylum. There, she is operated upon by William Gull, physician to Victoria, so that her cognitive faculties are destroyed.

The situation seems under control until Sickert receives a blackmail note from Mary Kelly, his one-time lover and the friend of Crook. Kelly, working as a prostitute with her acquaintances Polly, Annie, and Liz, has fallen on hard times and needs money to pay off a local gang rumored to kill prostitutes who fail to pay the requisite protection money. Sickert, already marginalized for his involvement in Albert's perversions, turns the matter over to Victoria. Victoria once again summons her loyal physician Gull, and gives him explicit orders to murder the four women. Gull enlists the assistance of the streetwise but moronic John Netley, a coach driver. Netley locates the women and gives them some gift that serves to establish their identity by visual cues. He then propositions them later in the evening, claiming that Gull—waiting in the coach—desires their company for sexual exploits. When the women comply, Gull instead murders them and then mutilates their bodies.

After killing three of the four women, Netley misidentifies Kate as Mary Kelly, the sole survivor, and Gull kills Kate, believing his task accomplished. Several weeks later Netley learns of his mistake and takes Gull out for one final murderous visit. Gull calls on Kelly's apartment, finds her alone, murders her and butchers her body. The abominable murders spark a frenzy of public fear. The Freemasonic order steps in and selects Montague Druitt as a scapegoat—the hapless man is murdered and framed for the crimes. The Freemasonic order then holds court on Gull and condemns him to finish his days in an insane asylum under the assumed name of Thomas Mason. Gull lives the remainder of his few years experiencing visions of glory and rapture, and believes his spirit moves through time inspiring others to acts of murder and violence.

More summaries and resources for teaching or studying From Hell: Being a Melodrama in Sixteen Parts.

From Hell: Being a Melodrama in Sixteen Parts from BookRags. (c)2022 BookRags, Inc. All rights reserved.