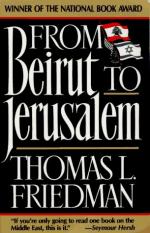 Plot Summary
+Chapters Summary and Analysis
Prelude: From Minneapolis to Beirut
Would You Like to Eat Now or Wait for the Cease-fire?
Beirut: City of Versions
Hama Rules
The Teflon Guerrilla
Inside the Kaleidoscope: The Israeli Invasion of Lebanon
Poker, Beirut-Style
Betty Crocker in Dante's Inferno
The End of Something
Time to Go
Crosswinds
Whose Country is This, Anyway?
The Fault Line
The Earthquake
Under the Spotlight
Israel and American Jews: Who is Dreaming about Whom?
Conclusion: From Beirut to Jerusalem to Washington
Epilogue
Free Quiz
Characters
Objects/Places
Themes
Style
Quotes
Topics for Discussion
Order our From Beirut to Jerusalem Study Guide

Thomas Friedman
This Study Guide consists of approximately 53 pages of chapter summaries, quotes, character analysis, themes, and more - everything you need to sharpen your knowledge of From Beirut to Jerusalem.

From Beirut to Jerusalem Summary & Study Guide includes comprehensive information and analysis to help you understand the book. This study guide contains the following sections:

This detailed literature summary also contains Topics for Discussion and a Free Quiz on From Beirut to Jerusalem by Thomas Friedman.

From Beirut to Jerusalem is the story of Thomas Friedman's time as a news correspondent first in Beirut and then in Jerusalem. Friedman learns a great deal serving in both locations. When he takes the job in Jerusalem, he drives from Beirut to Jerusalem. In many ways the two cities are worlds apart but in many ways they are very similar. Friedman says this book describes his journey between these two worlds and the problems and experiences that he has in each.

Friedman is not a journalist by training. He majors in Middle Eastern studies and takes a masters degree from Oxford. While there he writes some articles that eventually land him a job with United Press International after graduation. Friedman becomes interested in the Middle East as a student. He is extremely impressed with Israel after the Six Day War and spends his high school summers on a kibbutz south of Haifa. He jumps at the chance of being the Beirut correspondent when the job opens up after a few months at UPI. After two years he becomes the Beirut correspondent for The New York Times. He remains in Beirut until June 1984 when he is sent to Jerusalem where he will stay until 1987.

Friedman is the first Jew to serve in Lebanon and he never really has problems there because of his Jewishness. He is objective in his covering of news stories and the Arabs expect that of him and respect him for it. If they do not think he is objective enough, they let him know. Friedman is quite candid about his experiences in Beirut, from his apartment building being blown up soon after his arrival to the use of fixers. His story lets people know how the news is covered in Beirut when there is no official government for confirmation of facts and how the news gets out when there is fighting and power failures. Friedman is actually taking the reader behind the scenes with him in covering the various news stories and in letting the reader know who the various characters are and how they think.

When Friedman is transferred to Jerusalem, he expects Israel to be the Israel he remembers from high school. He finds this is not the case and that the country is much more Americanized than he remembered it. Friedman becomes entangled in what it means to be Jewish in Israel and how it differs from being Jewish in the United States. Friedman seems to be somewhat disappointed in the situation in Israel especially once the intifada begins and he watches the reactions of the Israeli soldiers.

Friedman uses his decade in the Middle East to give his own evaluation of the problems that exist there and what it will take to solve them. Somebody has to talk to all of the participants in their own language, so to speak, and no one has been willing to do that. He also has his own proposal for a solution to the Israeli-Palestinian problem that he presents in the form of a speech in the Epilogue.

More summaries and resources for teaching or studying From Beirut to Jerusalem.

From Beirut to Jerusalem from BookRags. (c)2022 BookRags, Inc. All rights reserved.