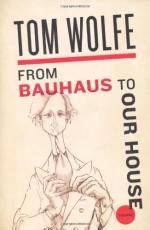 From Bauhaus to Our House Summary & Study Guide

Tom Wolfe
This Study Guide consists of approximately 20 pages of chapter summaries, quotes, character analysis, themes, and more - everything you need to sharpen your knowledge of From Bauhaus to Our House.

From Bauhaus to Our House Summary & Study Guide Description

From Bauhaus to Our House Summary & Study Guide includes comprehensive information and analysis to help you understand the book. This study guide contains the following sections:

This detailed literature summary also contains Topics for Discussion on From Bauhaus to Our House by Tom Wolfe.

Tom Wolfe ranks among the most iconoclastic literary and art critics in the twentieth and twenty-first centuries. The author of numerous books and a famous coiner of widely used phrases like "radical chic," "the right stuff," and "the Me decade," Wolfe has had a major impact on American culture, journalism and aesthetic critique. In his many books, Wolfe often takes aim at the establishments of various artistic and literary fields, such as art, literature, journalism and architecture. From Bauhaus to Our House is his critique of modern architecture and the architectural establishment.

The book is short and polemical, advancing savage criticisms of the most famous architectural theorists of the twentieth century such as Walter Gropius, the founder of the Bauhaus school of architecture, and associated figures such as Ludwig Mies van der Rohe for being excessively theoretical, condescending to the consumer and integrating their radical left-wing anti-bourgeois ideology into their buildings. He is particularly critical of the importation of Bauhaus architecture into the United States, which here is often referred to as The International Style of architecture.

The book mounts its criticism as a historical narrative that extends from the end of World War I, ending the dominance of late nineteenth and early twentieth century architects that Wolfe approves of, and the beginning of the dominance of the Bauhaus school and its leader, the "Silver Prince," Walter Gropius. At first, Wolfe argues that the Bauhaus school has its ideological origins in the shattered emotional state of post World War I Europe, and Germany in particular. The Bauhaus style is one of smoke, rubble and destruction with a deep socialist impulse and hostility to anything it conceived of as "bourgeois."

Compounds of Bauhaus ideologues quickly formed and governments picked up their styles in public buildings. The Bauhaus architects came to use "bourgeois" as a term of art to mean whatever they disapproved of. When World War II came, many of these architects came to the United States and immediately dominated the architectural high culture of the United State, producing a number of students who continued the dominance of this radical left-wing theoretical chic all the way to the early 1980s when the book was written.

More summaries and resources for teaching or studying From Bauhaus to Our House.

From Bauhaus to Our House from BookRags. (c)2022 BookRags, Inc. All rights reserved.