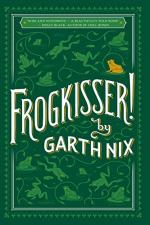 Garth Nix
This Study Guide consists of approximately 91 pages of chapter summaries, quotes, character analysis, themes, and more - everything you need to sharpen your knowledge of Frogkisser!.

This detailed literature summary also contains Quotes and a Free Quiz on Frogkisser! by Garth Nix.

The following version was used to make this guide: Nix, Garth. Frogkisser! New York, New York: Scholastic, Inc., 2017. This young adult novel is 35 chapters long, with a prologue and epilogue, but for the purposes of this guide will be broken into seven sections.

The novel begins with a prologue titled, “Ten Years Before” (1). Puppies, an older dog, and a princess play in front of a fire. While the princess sleeps, the older dog tells the puppies that the Duke is a sorcerer, and in time will grow too powerful. She explains it is their job to keep the princesses happy, and the prologue ends as the princess wakes and begs for a story.

Chapter One opens with a scream from Anya’s older sister Morven. Morven’s recent love, Prince Denholm, has been transformed into a frog by their evil stepfather Duke Rikard. Morven begs Anya to find him in the moat. Anya finds the frog prince in the moat, but Morven refuses to kiss him to transform him back. Gotfried, the owl librarian, gives Anya a lip balm that she can wear to kiss the frog and transform him back to human, since Anya is not in love with the Prince. The frog transforms back into a human, but not Prince Denholm. Duke Rikard tells Anya he is shipping her off to school far away. Seeking advice, Anya goes for a walk with Tanitha and Ardent, royal dogs, and Anya finds the real Prince Denholm in frog form from a frog catcher. Tanitha advises Anya to go on a Quest, and bring Ardent with her as he has his own Quest. Gotfried delivers the lip balm recipe, and Anya begins her Quest.

Soon Anya and Ardent happen upon a cabin in the woods, where they meet Martha and her son Shrub, a transformed newt. Anya agrees to help Shrub transform back to a boy, if Shrub helps her acquire part of the lip balm recipe from his father, a retired druid. They set out to find his father in the woods, but are stopped in the woods when they run into Bert and her band of robbers. Bert explains to Anya how they want to put the kingdom back together under the All-Encompassing Bill of Rights and Wrongs, as written by the Only Stone.

They wake in the middle of the night as weaselfolk are about to attack. They escape into the woods and Shrub finds his father, who gives him blood for the lip balm recipe. They start off to find the Good Wizard, and run into Smoothie, a transformed weasel who asks for help to be transformed back to an otter. Anya agrees to help Smoothie and they continue - the team now including Smoothie, Shrub, Anya, Ardent, and Denholm. Back on the road, they run into the hungry Beware the Giant, but Anya outsmarts him. Eventually they find the Good Wizard outside her tower, and she brings them inside for dinner.

Dinner at the castle, however, is interrupted by a Herald who tells them the Duke has put a price on Anya’s head. The Good Wizard shows Anya the magic mirror where she sees a future vision of a bleak Trallonia with people in rags and destitute. The next morning, Bert and the robbers are there after battle with weaselfolk. They ask again for Anya to help unite the kingdom and to get the Only Stone back. Anya and her friends fly to the Blasted Heath on a magic carpet, where Anya trades the witches onions for their tears, which she needs for the potion. The witches try to trap her to sell her to the Duke, but she escapes, and they fly to New Yarrow to get the rest of the ingredients.

They land outside New Yarrow, and climb into a boat to get them through the canals of the city, to find the meetinghouse of the League of Right-Minded Sorcerers. Once inside the meetinghouse, they find the rest of the ingredients they need for the lip-balm, but Denholm slips away and joins a pond of frogs in a greenhouse. The Grey Mist attacks them, and with no time to spare, Anya puts all the frogs in a sack and they escape to the roof. They fly back to Shrub’s mother’s house in Trallon Forest to start making the potion.

They land in Trallon Forest, and Anya tells everyone to spread the word for allies to gather at Martha’s hut to fight Duke Rikard. By the next morning the lip balm is ready but the allies are still not there, so Anya begins to kiss frogs from the sack, hoping they are warriors - and they mostly are. She transforms one frog to a knight who begins to take charge. She also transforms Denholm back to human, and he promises to fight for Morven. They amass enough warriors, and Ardent leads them to a secret tunnel where they find the royal dogs hiding. They begin the battle but soon find the Duke at the top of the castle holding Princess Morven hostage. He drops her but Prince Maggers falls with her and they transform into magpies together and fly away. The Duke angrily yells out spells at Anya but Shrub stands in front of her and nothing happens. Out of nowhere, Gotfried flies into the Duke’s face and they plummet to the ground. Once there, Anya pushes the Duke down, Ardent lies on his body, Shrub on his face, and Smoothie bites his wand-wrist. Merlin tells Shrub to give up the Only Stone, which he coughs up, as he stole it from the meetinghouse and hid it in his mouth. Anya kisses Shrub and he transforms back into a little boy. The Duke gets a fair trial, and is banished to a remote island, and Anya is crowned queen. The novel ends with a Herald announcing in the epilogue, “What Could Be Next for the Frogkisser?” (372).

More summaries and resources for teaching or studying Frogkisser!.