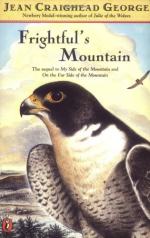 Jean Craighead George
This Study Guide consists of approximately 40 pages of chapter summaries, quotes, character analysis, themes, and more - everything you need to sharpen your knowledge of Frightful's Mountain.

“Frightful’s Mountain” is a young adult novel by Jean Craighead George which serves as the final installment in a trilogy which includes her novels “My Side of the Mountain” and “On the Far Side of the Mountain”. In “Frightful’s Mountain”, Frightful, the female peregrine falcon formerly a pet of Sam Gribley, attempts to reintegrate into the wild, while maintaining her ties with Sam and Bitter Mountain. The novel begins where “On the Far Side of the Mountain” ends: Sam, knowing that it is illegal for him to keep a pet peregrine falcon, and wanting Frightful to have a good and full life in the wild, refuses to call Frightful to him when he sees her flying around in the sky. Frightful then befriends and becomes the mate of Chup, a male peregrine falcon, and becomes the adoptive mother to Chup’s motherless children, Drum, Lady, and Duchess. It is a crash course for Frightful, who must not only learn to eat new kinds of food –primarily ducks and other birds, whereas she had been trained to hunt small game by Sam –but to care for wild baby falcons.

As November comes on, and all the falcons and other birds migrate south, Frightful stays on, determined to find her old mountain, and her old home. She is electrocuted on a utility pole, nearly killed, by nursed back to health by falconers Jon and Susan Wood, and is released in the spring. Frightful seeks out Bitter Mountain, and finds Sam, where she spends some time with him and hunts. She then decides to nest on the bridge in the town of Delhi. She attracts a mate named 426, a bird tagged and tracked by the U.S. Fish and Wildlife Service, and she lays three eggs. Yet, as this happens, a construction crew moves onto the bridge to begin work. Sam sneaks up to the bridge every day, and spends hours keeping Frightful calm, so she can incubate her eggs. Leon Longbridge, the local conservation officer, and a group of school kids, including Molly and Jose, try to get the construction to cease until Frightful’s babies hatch, but the crew cannot stop work without orders from the state government. The construction crewmembers feel bad they cannot stop work, but they have no choice in the matter. Attempts to move Frightful and her eggs fail, so when it comes time to paint the bridge, the crews decide they will paint the section of the bridge with Frightful on it, last. Finally, Frightful’s babies hatch.

One morning, two agents from the U.S. Fish and Wildlife Service show up to remove two of the baby falcons. In reality, they are Bate and Skri, two poachers arrested in “On the Far Side of the Mountain”, and back in the business of illegal selling of falcons. Sam helps track them down, and the police arrest Bate and Skri as they hide out in the old summer lodge of nature writer John Burroughs. From there, Frightful’s two babies will be raised and hacked into the wild. Meanwhile, Frightful raises her daughter, Oski, on her own on Bitter Mountain with Sam. Ultimately, they all fly south for the winter. When Frightful returns, she visits Sam as usual, but decides to nest in town, rather than on Bitter Mountain. Oski, however, decides that Sam’s mountain is a perfect place to nest.

More summaries and resources for teaching or studying Frightful's Mountain.