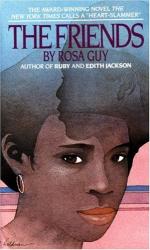 Rosa Guy
This Study Guide consists of approximately 22 pages of chapter summaries, quotes, character analysis, themes, and more - everything you need to sharpen your knowledge of The Friends.

The Friends Summary & Study Guide includes comprehensive information and analysis to help you understand the book. This study guide contains the following sections:

This detailed literature summary also contains Topics for Discussion on The Friends by Rosa Guy.

Fourteen-year-old Phyllisia Cathy is constantly picked on, not only by her classmates, but also by her white teacher. She immigrated to America from the West Indies with her parents and older sister Ruby. Because she is different, many of the poorer students try to beat her up for being smarter and better off than they are. Only one person sticks up for Phyllisia, and that person is Edith. Edith is poor and unkempt, and Phyllisia rejects her at first because of her social standing. However, in order to survive living in Harlem, she needs an ally; she befriends Edith and discovers that Edith is actually a nice person.

At home, Phyllisia is constantly compared to her beautiful mother and sister. Her father, Carter, who always says that Phyllisia is the plain one, ignores her. Even when she is beat up at school, the family ignores her in favor of talking about each other. For that reason, Phyllisia hates her father. To get back at him, Phyllisia decides to skip school with Edith , even though, at first, she is afraid her strict father will see her and punish her for being out of school. On her way home, she is nearly caught in a riot, but Edith saves Phyllisia and brings her back to Edith’s run-down one-room apartment. When Phyllisia returns home, she finds out that her father has seen her with Edith. He forbids her to see Edith again.

Phyllisia, however, is not deterred by her father’s threats. She continues to see Edith nearly every day until Edith’s father suddenly goes missing, after which Edith drops out of school in order to find a job and take care of her family. Phyllisia begins high school, where she hangs around a popular girl, Marian, whom she had envied the year before. Just as her social life is beginning to bloom, Phyllisia’s mother becomes very ill. Calvin forces Phyllisia and Ruby to return home right after school every day to take care of their mother. Phyllisia obeys, but at this point she feels compelled to find Edith to see how she and her family are doing.

After reconnecting with Edith, Phyllisia invites her over on the pretense of meeting her mother; however, Phyllisia’s true motive is to elicit Edith’s jealousy over her stylish home. When they arrive, Edith goes immediately to Phyllisia’s mother and starts talking with her in an attempt to cheer her up. Phyllisia becomes jealous when Carter comes in the door.

Carter forces Edith out of the house because she is poor and he does not want his family to be seen with someone of her social class. Later, Phyllisia’s mother softly scolds Phyllisia for inviting Edith over just to flaunt her wealth, although she admits that it is partially her and Calvin’s fault for placing too much emphasis on superficiality. She tells Phyllisia that she will regret her behavior later in life. Soon after, Phyllisia’s mother dies.

Phyllisia begins having nightmares about a woman calling out Phyllisia’s guilt. She becomes extremely ill and can hardly walk. Ruby was diligent in taking care of her sister, but Calvin resents the attention that Phyllisia is receiving. Convinced that Phyllisia is faking her illness, he forces her to get out of bed and eat. Phyllisia is too scared of him to protest.

Unwilling to defy her father, she is too scared to go see Edith, so she reestablishes her friendship with Marian. Ruby wants to go to a party at Marian’s house, and persuades Phyllisia to come along. When they arrive, Marian’s boyfriend makes advances towards Phyllisia; upset, she flees to Edith’s apartment. Yet, when she arrives, she is afraid to face Edith and retreats, returning home. As Phyllisia approaches her house, she sees Calvin threatening Ruby with punishment for going out with boys. Calvin decrees that his daughters may only leave the house to go to school.

At first, Phyllisia complies with Calvin’s orders, but gradually she begins to disobey, staying out later. She tells Calvin’s friends that her father has gone mad, and they convince Calvin to give the girls more freedom. When Phyllisia begins skipping school to have a relationship with a boy, Calvin decides to ship both girls back to the West Indies to live with his family.

Phyllisia goes to say goodbye to Edith, and finds her alone in her apartment. Edith tells Phyllisia that two of her sisters have been taken away, and her father, brother, and youngest sister have died. Phyllisia realizes that she should have been there for Edith, and promises to would keep in touch after she returns to the West Indies. After her visit, Phyllisia returns home to talk with her father. As they converse, they are able to clear the air, realizing that they need to communicate with each other in order to have a better relationship. At the last, Calvin agrees not to send the girls away to the Island, but to let them stay in Harlem.

More summaries and resources for teaching or studying The Friends.

The Friends from BookRags. (c)2022 BookRags, Inc. All rights reserved.