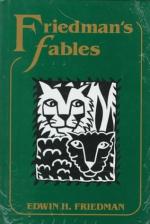 Edwin Friedman
This Study Guide consists of approximately 39 pages of chapter summaries, quotes, character analysis, themes, and more - everything you need to sharpen your knowledge of Friedman's Fables.

Fables are stories, generally short, written as commentary on a particular aspect of humanity but often using non-human characters like animals or inanimate objects to make their point. They are based on and defined by behavior, rather than on fact.

A fable is a form of allegory, a narrative that communicates meaning through imagery. It is, on some level, an extended metaphor illustrating a particular moral point, generally doing so outside any particular religious context. "Aesop's Fables" are perhaps the most well known of this sort of story.

The Friendly Forest is the ironically named setting for the story of the fearful Lamb and the Tiger who, the narrative suggests, is simply being himself.

The holly, a hedge plant or shrub with glossy and sharply pointed leaves, is traditionally associated with Christmas, but in the story that bears its name plays...

More summaries and resources for teaching or studying Friedman's Fables.