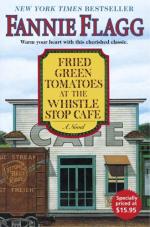 Fannie Flagg
This Study Guide consists of approximately 53 pages of chapter summaries, quotes, character analysis, themes, and more - everything you need to sharpen your knowledge of Fried Green Tomatoes at the Whistle Stop Cafe.

This detailed literature summary also contains Quotes and a Free Quiz on Fried Green Tomatoes at the Whistle Stop Cafe by Fannie Flagg.

Fried Green Tomatoes at the Whistle Stop Café is the story of the town of Whistle Stop, Alabama, and its residents over the course of three generations. Most of the story centers on Ruth Jamison and Idgie Threadgoode, two best friends (and assumed lovers) who impacted the lives of everyone in their community. The story is told both in present tense, from the 1920’s – 1940’s, when the events occurred, and in past tense, when Ninny Threadgoode relives those events by retelling them to her friend, Evelyn Crouch, in the 1980’s.

When Idgie Threadgoode is a child in the 1920’s, she is profoundly affected when her older brother, Buddy, is killed in a train accident. She doesn’t think she will ever love anyone again, and becomes somewhat of a wild, rebellious child until the summer that she meets Ruth Jamison, a visiting Sunday school teacher, and falls head-over-heels in love with her. When Ruth returns to Georgia to marry Frank Bennett, Idgie is once again heartbroken. She spends the next four years intermittently checking up on Ruth, and discovers that Frank is beating her. She immediately intercedes and Ruth returns to Alabama with her. Ruth and Idgie move in together and raise a son, Stump, whom Ruth was pregnant with when she left Frank. With money gifted to her by her father, Idgie opens the Whistle Stop Café as a way of supporting her new family, and they all live happily together until Ruth’s death from cancer in 1947.

While running the Whistle Stop Café, Idgie and Ruth aid a variety of people, particularly during the Great Depression, when the women feed every hungry person – often at no charge – that comes through their doors. Idgie also aids the “colored” residents of Whistle Stop by serving them from the backdoor – even though segregation is strictly enforced – and treating her colored employees with the same fairness with which she treats her white employees. When Frank Bennett tries to steal the baby from her house one evening, one of those colored employees, Sipsey, kills him with a frying pan, and her son, Big George, disposes of the body in that week’s barbecue, which he feeds to the detectives performing the murder investigation. Even when Idgie is arrested for the crime years later, she refuses to blame Big George or Sipsey, and risks time in prison lying to give them alibis. When Ruth dies of cancer, Idgie’s story essentially comes to a close, but at the end of the novel, it is hinted that she is still alive.

Meanwhile, Ninny Threadgoode retells the stories of Idgie’s adventures to Evelyn Crouch, an overweight, depressed woman, who visits her weekly. Evelyn undergoes a massive transformation due to Mrs. Threadgoode’s stories, and a deep friendship blossoms between the women. Evelyn goes from a suicidal overeater to a successful businesswoman selling Mary Kay. At the end of the novel, Evelyn has enrolled in a summer-long fitness camp for women, where she is happily losing weight and making friends with she hears that Mrs. Threadgoode has died. Evelyn’s experience seems to suggest that a small quaint life, where each member of a community is loved and fulfilled, is the fastest way to a happy life. It also suggests that when you’ve lived a full life, your legacy will live on forever.

More summaries and resources for teaching or studying Fried Green Tomatoes at the Whistle Stop Cafe.