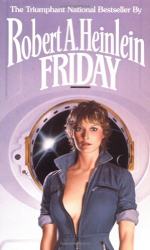 This detailed literature summary also contains Topics for Discussion on Friday by Robert A. Heinlein.

The book is written in chronological order through the eyes of the main character, Marjorie Friday Baldwin. Friday is the woman's professional name while Marjorie Baldwin is a name that Friday uses in personal relationships.

"Friday" begins with Friday being tailed during an operation in Kenya. Friday kills the man shadowing her. Friday has a few altercations where she barely survives on her way back to her Boss' headquarters in the Chicago Imperium. Friday learns that she has been part of a bigger and more complicated ruse than she was led to believe. This is not unusual however.

Friday insists on having time off after this last grueling assignment. Friday returns to her S-Group family in Christchurch, New Zealand. Friday's experiences with her family are recounted. The relationship lasts for many years until it is learned that Friday is not human but rather an Artificial Person. Friday is ousted from the family.

On her journey, Friday meets Captain Ian Tormey. Friday goes with Tormey to his home in Stonewall, Canada. While in residence, the group learns that civil disorder has occurred and Friday is now in jeopardy.

Friday is unable to reach any of her contacts, including the Boss, so she must make the best use of her resources. Friday makes her way south where it is supposedly safer for her, a fugitive from the law. Friday joins a military envoy known as Rachel's Raiders which is scheduled to return to the Chicago Imperium. Shortly before the ship blows up from enemy attack, Friday lands in Arkansas and is taken in by a friendly family.

Friday reaches the Chicago Imperium only to learn that the Boss has dismantled the headquarters and has moved to parts unknown. Friday, desperate to see Janet, returns to Stonewall only to find that they, too, have fled just before being arrested for harboring fugitives.

Friday ends up in California and is reunited with the Boss. Just as Friday is undergoing training for a new profession, the Boss dies and the agency is dismantled. Friday is on the run once again. This time however she is trying to make her own way in a world where there are few people that she can trust. Friday finally receives another job as courier but finds that she has been a pawn in an international plot. Friday has been unknowingly impregnated and is scheduled to give birth to the child of the First Citizen and the Dauphiness, world leaders.

Aboard the Forward, a ship destined for space, Friday rekindles her relationships with her old friends from Earth and also meets several new people. Friday knows that she must escape or be killed after the baby is born. Friday manages to escape from the ship and to live out her days with a family of her choosing on a space colony.