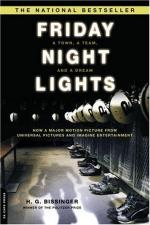 This Study Guide consists of approximately 48 pages of chapter summaries, quotes, character analysis, themes, and more - everything you need to sharpen your knowledge of Friday Night Lights.

NOTE: This study guide refers specifically to the 2015 Twenty-Fifth Anniversary Edition of “Friday Night Lights,” which includes a new afterword by the author.

“Friday Night Lights: A Town, A Team, and a Dream” is the account of the 1988 Permian High School Panthers football team in Odessa, Texas. First published in 1990, the book later became a movie and a television series. The author, journalist H.G Bissinger, explains that his fascination with America's love of sports inspired him to write “Friday Night Lights.” He states that one sport, high school football, even helps to hold small communities together. Researching various teams, Bissinger finds Permian High School in Odessa, where twenty-thousand people regularly attend games. In March,1988, he quits his job, packs up his family, and moves to Odessa.

When Bissinger arrives in Odessa, he learns all he can about the importance of football in the town. Odessa has two high schools, Odessa High and Permian High. However, Permian has a great reputation for football, having won several state championships. At the moment, football is the only source of pride for the town. Odessa is a very conservative, middle-class town. It has enjoyed booms and suffered busts from its oil industry. Since the town is currently in the midst of an economic downturn, the people devote even more time on high school football, a sport that brings Odessa a measure of success. Like most Southern towns, Odessa has a long history of segregation. However, on the football field, the citizens are able to find common ground between whites, blacks, and Hispanics. Skin color ceases to matter. The 1988 team consists of black players James “Boobie” Miles (a running back) and Ivory Christian (one of the team captains). The white players include Jerrod McDougal (offensive tackle), Don Billingsley (troublemaker), and Mike Winchell (quarterback). Brian Chavez, a tight end, is Hispanic.

Bissinger explains that the citizens of Odessa spend time, money, and energy on football –especially Permian High football –like nothing else. For a brief season, the junior and senior varsity team members enjoy the shower of glory that rains down on them. It is unlike anything they will experience again in their lives. They date the prettiest girls, have a blind eye turned toward bad grades, goof off, and skip classes. They are local celebrities. Nevertheless, the players feel a tremendous amount of pressure, for they carry the weight of the town on their shoulders. They know how seriously their parents and the locals take football. At the same time, most players see football as a ticket out of town, hoping to be picked up by college scouts. Others want to live in the moment, knowing they are destined for the oil fields or local blue-collar jobs.

Head Coach Gary Gaines knows all these things, and he knows his own job is dependent on winning games. Gaines is determined to help the young men on his football team achieve their next state championship. The season gets off to a good start, but two losses tie the Panthers in first place with the Midland Lee Rebels and the Midland High Bulldogs. Both teams are the Panthers' biggest rivals the next town over. Most Permian fans and some players are furious with the three-way tie, blaming everything on Coach Gaines. Gaines knows that the record of only two losses is not something of which to be ashamed. However, in a town where winning is everything, a loss is devastating and cause for anger. The three-way tie means that, according to district rules, a simple coin toss will be used to decide which teams go on to state playoffs. The Panthers and the Rebels advance. The Panthers progress well through the playoffs, beating the Rebels but succumbing to the Dallas Carter Cowboys. The Cowboys have some of the best players in the entire country. The loss is heartbreaking, especially to the senior players, whose moment in the spotlight is now over. During the following year under Gaines, the new Panther team takes the state championship.

Twenty-five years later, Bissinger returns to visit the people he wrote about in his book. After Permian experienced some bad years, the school hired Gaines once again to help get the football program back on track. He retired in 2012. Boobie, who suffered a tragic knee injury during the 1988 season, was never able to play football again. He now has children and works menial jobs. Ivory Christian is married and works as a trucker. Jerrod McDougal works for his family’s construction business. He has never married. Mike Winchell works locally as a lease manager for an energy company. He has never married. Don Billingsley has turned his life around. No longer a troublemaker, he is a family man who works as a successful consultant. Brian Chavez, who graduated from Harvard, went on to become a lawyer. However, his legal license was suspended for getting into a fight with his fiancee’s ex-husband. The town of Odessa is doing much better economically. Most importantly, as Brian explains, the town now has a healthy relationship with football.