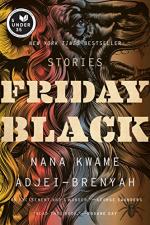 Nana Kwame Adjei-Brenyah
This Study Guide consists of approximately 55 pages of chapter summaries, quotes, character analysis, themes, and more - everything you need to sharpen your knowledge of Friday Black.

Friday Black is a collection of 12 short stories, many of which are interrelated through common themes, characters, and settings.

In “The Finkelstein 5,” protagonist Emmanuel battles rage and disillusionment after the acquittal of a white man in the murders of five black youths. Emmanuel ran into an old friend from high school who invited him to join a vigilante group who were killing innocent white people in acts of retributive justice for the murders. Emmanuel agreed to join, and the group singled out a young couple kissing in their car. However, when it came time to kill them, Emmanuel could not do it. The police arrived on the scene. Though Emmanuel raised his arms to surrender, the police killed him.

In “Things My Mother Said,” an unnamed narrator recalls his difficult and impoverished upbringing with a mother who was tough but loving. He remembers one day in particular when the gas and electric had been turned off, but he came home to find chicken and rice in a pot. He went outside and discovered ashes in the grass; his mother had built a fire and cooked the meal outside.

“The Era” takes place in a future dystopian society that forbids expressing emotions. The society’s citizens are given a drug called Good to keep them compliant. A boy named Ben finds himself increasingly in need of more Good. When his parents restrict his intake, he suffers symptoms of withdrawal. Ben receives an invitation to a birthday party at a friend's house and discovers that her family lives entirely without Good. Furthermore, they are kind and considerate, qualities not prized in this society. At the end of the story, Ben abstains from the Good offered by a school nurse.

In “Lark Street,” the unnamed narrator woke to discover specters of the twin fetuses his girlfriend Jaclyn recently aborted sitting by his bed. The fetuses asked him if he felt guilty for the abortion, and then cajoled him into visiting the psychic his girlfriend was fond of seeing. Upon arrival, the narrator saw that Jaclyn was there too, and he admitted paying the psychic to tell Jaclyn that she was making the right decision about the abortion. Jaclyn responded that the narrator was a fool because she had already made up her mind anyway. Then, she took the two fetuses and walked away, leaving the narrator alone.

“The Hospital Where” is a surrealistic story about a man who made a deal with a demon called the Twelve-tongued god, granting him creative writing skills. When the man took his father to the hospital for medical treatment, a trickster god harassed him. Ultimately, he wrote his own ridiculous ending for his ordeal, in which he told the patients that they were well again and could leave. The patients left the hospital and began to fly, only to immediately crash back down to earth.

In “Zimmer Land,” narrator Isaiah works at a theme park in an attraction where he is confronted and shot on a simulated neighborhood street by patrons pretending to be in a neighborhood watch. The simulation is inherently racist, but Isaiah believes he can convince the CEO to make changes to the park. At a creative meeting, however, Isaiah's suggestions are dismissed, and he learns that the park is going to begin admitting children. He is distraught, and confronts a patron visiting with his child about his bigotry at the end of the story.

In “Friday Black,” an unnamed narrator is working at a coat store during a Black Friday sale, and all of the customers are bloodthirsty zombies. The narrator is unperturbed by the general mayhem, as he has his sights set on winning a sales contest and getting a free coat for his mother. The narrator takes a break in the bloodstained food court, but is interrupted by a co-worker begging him to return. Back at the store, a zombie has another co-worker, Angela, pinned against a wall, and the narrator gives the zombie the coat he had set aside for his mother to save her.

“The Lion & the Spider” tells the story of a young narrator whose father recently left his family. The narrator was graduating from high school, but also worked six days a week unloading trucks at a hardware store to support his mother and sister. In the end, his father returned, and the narrator had ambivalent feelings about this.

In “Light Spitter,” a bullied college student, nicknamed F—kton, shoots a fellow student, Deirdra Hayes, in the school library, then shoots himself. Their spirits emerge from their bodies and they enter into a reluctant mission to stop a high school student from carrying out a school shooting. Deirdra fails to convince the student to abort his plan, but F—kton, who understands the boy's pain, succeeds.

“How to Sell a Jacket as Told by IceKing” returns to the same setting and narrator from “Friday Black” as he helps a family of customers and boasts about his sales skills. He mentions his co-worker Florence, and how she is also a great salesperson, despite their different priorities

In “Retail,” IceKing's co-worker Florence meditates on the suicide of a fellow mall employee while helping a customer. Florence is prone to despair, and worries she might succumb to a similar self-destructive fate. However, her spirits are buoyed by her love for her daughter, and her brief moment of happiness at being able to assist a customer.

“Through the Flash” is set in a dystopian future where a single day is repeated over and over again in a loop. The narrator is Ama, a 14-year-old girl, who was once the violent, knife-wielding queen of her neighborhood. She has changed her ways and is trying to be kinder. Ama has a strange dream that may portend the end of the loop, as she faces a confrontation with her nemesis, another violent 14-year-old named Carl. Ama bests Carl in hand-to-hand combat, but spares his life. Then, Ama watches the day end with her father and brother, presumably to experience the day again just moments later.

More summaries and resources for teaching or studying Friday Black.