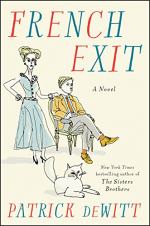 The following version of this book was used to create this study guide: deWitt, Frances. French Exit. New York: HarperCollins, 2018.

French Exit begins with 65-year-old wealthy socialite Frances Price learning from her accountant that she had lost all but a small remainder of her fortune and that she would be forced to move out of her lavish New York City apartment. Frances and her 32-year-old son Malcolm, who lived with her in a state of extreme codependency, moved into the Four Seasons temporarily. At the hotel, Malcolm was visited by his fiancée, Susan, who noted her disappointment that Malcolm was moving away, apparently choosing his mother over her (and not for the first time). Frances had lunch with her best friend Joan, who offered her the use of her apartment in Paris. It is revealed through Frances' discussions with her accountant that she was the subject of scandal after the death of her husband, Franklin Price, a high-powered attorney known for taking on the most despicable clients imaginable. After discovering Franklin's body, Frances left it there without calling the police, and went on a ski trip.

Malcolm and Frances went back to their apartment to retrieve their cat, Small Frank, and then purchased tickets for a cruise ship that would take them to France. Aboard the ship, Malcolm met a psychic named Madeleine who told him that she saw a green aura around someone when their death was imminent. Madeleine noticed something strange about Small Frank, something Malcolm and Frances were already aware of. When a woman aboard the ship actually died after Madeleine predicted it would happen, Madeleine was thrown in the brig, and the very odd cruise ship doctor took Malcolm to the morgue to show him the dead body.

Upon arriving in Paris, Malcolm and Frances visited a church where Frances recalled going to her mother's funeral and celebrating her death, and Franklin's funeral, which she attended even though she was barred. Malcolm recalled two horrible memories of his father, one in which he got angry at the behavior of the monkeys at the zoo, the other where he sent Malcolm home from a father/son party after Malcolm got sick from drinking too much soda. Next, they were invited to dinner at a woman named Mme. Reynard's house. She knew of Frances from her youth in New York City and admired her. Mme. Reynard's husband had recently died and she was desperate for company.

Malcolm began to grow concerned about his mother, who seemed sad and out of sorts. He also missed Susan, so he called her, and discovered with horror that she was with another man, her former fiancé Tom. He asked her to come to Paris, and she responded that she owed him nothing and their relationship was over. Small Frank ran away, and Frances decided they ought to find Madeleine, who was also in Paris, as they believed she would be able to locate him. They explained to Mme. Reynard that Franklin Price's soul lived inside the cat. Mme. Reynard suggested they hire a private investigator to find Madeline, but accidentally hit her head on a light fixture while jumping out of her seat. They called her doctor, Dr. Touche, who arrived with a bottle of wine. Discovering the wine was corked, he phoned his wine merchant, Jean-Charles who arrived next. Jean-Charles knew a private investigator, named Julius, who was quickly hired to find Madeleine. He did so by placing posters around the city featuring a description of her.

Frances wrote Joan a plaintive postcard, then decided not to mail it, and left it behind on a cafe table. A waiter found the card and put it in the mail. Frances began giving large sums of money away, and even flushed some down the toilet. She told Madeleine that when she came home to find Franklin dead, the cat that became Small Frank was sitting on his chest, seemingly sucking his soul out. Meanwhile, Small Frank/Franklin wandered the streets of Paris trying to get someone to take him in, to no avail. He tried to jump off the Eiffel Tower, only to discover that he always landed on his feet. Madeleine, Frances, Malcolm, Mme. Reynard, and Julius conducted a séance to contact Small Frank who stated that he ran away because Frances threatened to kill him. Malcolm and Frances both argued with Franklin/Small Frank. Julius and Mme. Reynard both moved into the apartment, and Joan arrived, worried that Frances planned to kill herself, followed by Susan and Tom.

The group decided to have a party and Frances spent the last of her euros on supplies. Everyone assembled for the party and Malcolm and Tom quarreled. Tom told Susan to choose between himself and Malcolm, and she chose Malcolm. Frances told a story about her mother ignoring her when she was a child until she got so frustrated she set her bedroom on fire. Malcolm followed with a story about being left at boarding school over a summer break with a frightening headmistress and groundskeeper. Frances told Malcolm to try to stop hating Franklin, and admitted to Susan that the reason she disliked her was because she was trying to take Malcolm away from her. In the middle of the night, Frances woke Madeleine and asked her to contact Franklin/Small Frank again. She told him that she was not angry with him anymore, and Madeleine noticed that she was glowing green. Frances then went into the bathroom and cut her wrists in the bathtub.

Mme. Reynard found Frances' body in the morning and called the police. Malcolm spoke to a detective, telling him that his mother was “overfine for this world” (239). He fondly recalled Frances picking him up from boarding school after Franklin's death. While walking home, Malcolm bought a bouquet of flowers and decided to bring them to Susan.