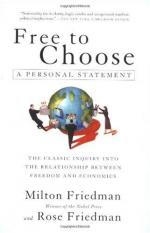 Plot Summary
+Chapters Summary and Analysis
Chapter 1, The Power of the Market
Chapter 2, The Tyranny of Controls
Chapter 3, The Anatomy of Crisis
Chapter 4, Cradle to Grave
Chapter 5, Created Equal
Chapter 6, What's Wrong with Our Schools?
Chapter 7, Who Protects the Consumer?
Chapter 8, Who Protects the Worker?
Chapter 9, The Cure for Inflation
Chapter 10, The Tide is Turning
Free Quiz
Characters
Objects/Places
Themes
Style
Quotes
Topics for Discussion
Order our Free to Choose: A Personal Statement Study Guide

Milton Friedman
This Study Guide consists of approximately 33 pages of chapter summaries, quotes, character analysis, themes, and more - everything you need to sharpen your knowledge of Free to Choose.

This detailed literature summary also contains Topics for Discussion and a Free Quiz on Free to Choose: A Personal Statement by Milton Friedman.

Free to Choose: A Personal Statement by Milton and Rose Friedman is a book about economics. The book illustrates the Friedmans' strong beliefs in free markets and capitalism. Milton Friedman's TV series, Free to Choose is based upon this book. The book combines introductory economics concepts with political philosophy, which is usually missing from many introductory economic courses. The Friedmans' economics is based on the themes of human freedom, economic freedom and equity and the book discusses what happens when these three concepts are ignored. The market relays information through prices; therefore, prices must be free to reach their own levels, based on the buying preferences of consumers and the selling preferences of producers, without any government interference. In this way, all market participants will receive the correct information from the markets without any distortions introduced by government rules, regulations and policies. This is basically Adam Smith's invisible hand concept. All market participants will do what is best for the economy while acting in their own self-interest ,and the result will be an efficient outcome in which all economic agents benefit from exchange. There cannot be political freedom without economic freedom void of force and coercion.

Using this approach as their basis, the Friedmans look at various economic problems that nations have faced. They compare the economic systems of capitalism and planned economy and discuss why capitalism results in greater prosperity. What is missing in the planned economy is the role of personal incentives based on freedom. The role of government interference is discussed throughout the book, which the emphasizes that any kind of government interference hinders the efficient operation of the economy. This is also true with international trade and tariffs. Tariffs produce distortions in trade and cause changes in the level of income, employment and production in the trading nations. The Friedmans make their case for free trade.

The Great Depression and the factors that contributed to it is also discussed. As the founder of the school of monetarism, Friedman's beliefs are evident throughout the book. They are highly critical of the cradle to grave welfare state. But instead of just criticizing, the Friedmans offer ideas to replace the policies and programs that are in place or proposed and discuss why programs that rely on the market are superior. This is consistent with the monetarist emphasis on markets. Various other issues are also tackled, such as education, taxes and government spending. The Friedman's favor a school voucher program because it gives parents and students choice. It brings about competition among the education providers and makes them more responsive to the demands of the users. And as most adherents with roots to the Classical School, the Friedmans so not support the idea of big government and propose ideas to limit governmental growth. The chapter on inflation is the classical, textbook monetarist policy requiring slow and steady growth in the money supply. The book concludes with the Friedmans' proposal of an Economic Bill of Rights, which is a very interesting concept.

More summaries and resources for teaching or studying Free to Choose: A Personal Statement.