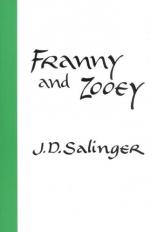 This detailed literature summary also contains Related Titles and a Free Quiz on Franny and Zooey by J. D. Salinger.

Franny and Zooey follows the conflicted and troubled minds of the youngest members of the Glass family, a sister and brother with an advanced education and intellect. Instead of helping them get through life, though, the siblings' elevated understanding of things leads to problems dealing with people not on the same intellectual level, which is almost everyone. Franny's negative views on virtually everything lead to a nervous breakdown while at college. Zooey is a successful actor who struggles with his own penchant for disliking people. Despite their shared problems, it's up to Zooey to help his sister through her crisis. After a long, rambling, sometimes mean-spirited talk with his sister, he finally says the right thing. He tells his sister not to worry about everyone else's faults, and to not let others get her down or get in her way. If nothing else, he argues, she should try to do her best for God. Happy and satisfied, Franny ends the novel by falling asleep with a smile on her face.

Franny and Zooey are young, attractive, and intelligent. They come from a successful family. However, none of this stops them from developing a sour, cynical view of the world that threatens their mental stability. Franny, whose real name is Frances, and Zooey, whose real name is Zachary, are 20 and 25-years old, respectively. They are the youngest members of the Glass family's seven children. All seven appeared on a long-running radio program, "It's a Wise Child," that featured the prodigiously smart children. Instead of finding rewards for their natural intellect, the oldest and youngest members of the family seem to suffer from it.

At the time of the novel, the oldest, Seymour, has committed suicide; the second-oldest Buddy, is a writer living alone in upstate New York; one of the twins Walt, died in an accident during the war; and the other son is a Catholic priest. Boo Boo, the other daughter, is a mother of three.

Franny is a 20-year old student at Yale who visits her boyfriend, Lane, at Harvard for the annual Harvard-Yale football game. Almost immediately, she starts deconstructing and putting down nearly everything and everyone he mentions. The more she criticizes, though, the more she sweats. The only time she sounds positive about anything is when discussing an obscure religious book, The Way of the Pilgrim. The book follows a Russian peasant who learns to pray incessantly, as the Bible instructs, by reciting the Jesus Prayer: "Lord Jesus Christ, have mercy on me." After several arguments with Lane, Franny passes out on the way to the bathroom. She awakens and is seen muttering something over and over.

That leads to the next section of the novel, entitled Zooey, where the second title character, Buddy Glass and Bessie Glass are introduced. The section opens with an introduction by Buddy. He provides the family background and apologizes ahead of time for his habit of rambling on. He explains that the following story is a love story, as told to him by the three main characters.

The story within the story begins with Zooey reading a four-year old letter from Buddy, while sitting in the tub. The long, wordy letter gives details about Seymour's suicide and seems to apologize for the lessons he gave Zooey and Franny as children. It ends with Buddy supporting Zooey's decision to become an actor. In fact, as Buddy explains in the introduction, Zooey has become a successful and highly sought-after television actor. Zooey's mother, Bessie, who comes in to drop off new toothpaste, interrupts him. This starts a series of illuminating and sometimes mean-spirited and humorous arguments between the pair. Zooey rudely tells his mother to get out and calls her fat and stupid at different times. In one of the more emotional moments of the novel, he rails against his brothers for turning him and his sister into "freaks," who cannot relate to normal people because of their advanced education and intellect.

Later, Zooey goes down to the den to talk to Franny, who came home and has spent all of her time lying on the couch, crying. He tells her about his inability to be kind to people, constantly criticizing and finding fault with everything. She tells him that she did the same with Lane. She later admits that she doesn't want to go back to college, because everyone is full of "ego" or is a "phony." The reason she is having a breakdown, she says, is because she is as full of ego as they are, and she's starting to hate herself. Instead of consoling her, Zooey lashes out at her. He tells her the breakdown isn't a real breakdown, because she came home to have it. He says that the Jesus Prayer, which she has started reciting over and over, isn't genuine, because she doesn't really believe Jesus was a good person. He leaves her crying and face down on the couch, in seemingly worse shape than before.

Zooey then shows his true concern and guilt. He goes into his older brothers' room, which he apparently hasn't been in since Seymour's suicide. After an hour's worth of thought, he makes a fake phone call to Franny. He pretends to be Buddy, but she catches on. Just before hanging up, he gives his sister a final, and successful, piece of advice. He tells her not to worry about the people she feels are inferior or phony, not because she's wrong about them, but because it's not her business. He says that she should act, if for no other reason than for God.

In the climatic conversation of the novel, Zooey tells her about a piece of advice that Seymour gave him. As a boy, Zooey didn't want to appear on the radio show, because he felt everybody involved with the show was a "moron." Seymour told him to shine his shoes and do his best for the "Fat Lady." The Fat Lady, Zooey tells Franny, is everywhere and everyone. It's Jesus Christ. In other words, do your best for God. This advice finally turns Zooey's mood around. The novel ends with her falling asleep on her parent's bed with a smile on her face.