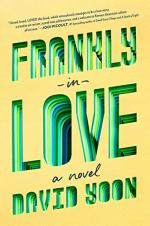 David Yoon
This Study Guide consists of approximately 59 pages of chapter summaries, quotes, character analysis, themes, and more - everything you need to sharpen your knowledge of Frankly in Love.

This detailed literature summary also contains Quotes and a Free Quiz on Frankly in Love by David Yoon.

In the coming of age novel Frankly in Love by David Yoon, Frank Li a Korean-American teen tells his reader he has two names. His Korean name is Sung-Min Li, and his American name is Frank Li. As Frank tries to fit in with American culture in his white neighborhood of Playa Mesa, he is constrained by the rules his parents have for him. First, he is expected to score high enough on the SAT that he will be accepted to attend Harvard. Additionally, he is expected to date only Korean girls. Frank knows his parents are serious about these dating restrictions because they have already disowned their daughter for marrying a black man.

During a conversation with Frank’s best friend, Will “Q” Lee, Frank tells Q that he wants a girlfriend who makes him laugh. He leaves out the fact that his parents expect him to date a girl who is Korean. This is a problem with Frank falls in love with Brit Means, a white girl in his Calculus class. Joy Song, a Korean girl with whom Frank grew up because their parents are friends, has a similar problem to Frank because she is dating a boy who is Chinese-American. To be able to go out on dates with their illicit significant others, Frank and Joy pretend to be dating one another, to the delight of both their parents.

Meanwhile, Frank’s father is shot at the store that he owns and operates. He survives the shooting, but Frank recognizes how close he came to losing his father and how little he actually knows about him. The evening that Frank’s father spends in the hospital, Joy and Q are the ones there to support Frank through the experience. Q recognizes before Frank does that while Frank believes he loves Brit, it is Joy who makes him laugh. At a Korean wedding a few days later, Frank realizes that he has been attracted to Joy all along. He breaks up with Brit and starts dating Joy.

Joy and Frank have just settled into a dating relationship when Frank’s father is angered by a comment that Joy’s father makes during a dinner party. An argument ensues, in Korean, which Joy and Frank do not understand. As a result of the families’ disagreement, Joy and Frank are supposed to stop dating. Frank is angry that he is being forced to stop dating a Korean girl, the only sort of girl he was allowed to date. Frank and Joy try to date in secret, but Joy breaks off the relationship because she does not want to make things strange with her family.

To make matters worse for Frank, his father has been diagnosed with cancer and given six to 12 months to live. Doctors found the cancer when they treated him for his shooting injury. Frank spends his summer trying to bond with his father. Frank has been communicating with his sister through text messages in secret. He has learned that she is pregnant. Frank tries to convince his father that he needs to contact Hanna.

When the fall comes, Frank goes off to college even though it seems strange to do so with his father being so ill. Frank finally understands that his father came to America and put so much work in at the family store because he wanted Frank to be able to go to college and live a better life. Frank’s father admits to Frank that his life has been a dream for him because he has a beautiful wife and a son smart enough to get accepted to study at Stanford. He tells Frank that Frank is both 100 percent Korean and 100 percent American.

It is Thanksgiving when Frank gets the call his father is dying. He arrives to discover that Hanna and Miles, her husband, are already there. Their father has made peace with Hannah and told Miles he will be a good father for the daughter they are expecting. A few days after his father’s funeral, Frank heads back to college. He tells his reader that he has one name: Frank Sung-Mi Li.

More summaries and resources for teaching or studying Frankly in Love.