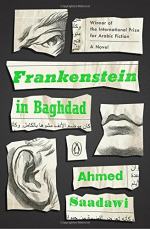 Ahmed Saadawi
This Study Guide consists of approximately 54 pages of chapter summaries, quotes, character analysis, themes, and more - everything you need to sharpen your knowledge of Frankenstein in Baghdad.

This detailed literature summary also contains Quotes and a Free Quiz on Frankenstein in Baghdad by Ahmed Saadawi.

The following version of this book was used to create this study guide: Saadawi, Ahmed. Frankenstein in Baghdad. New York: Penguin Books, 2018.

The novel is set in Iraq in 2005, and begins with a top secret memo written by an Iraqi intelligence committee investigating the Tracking and Pursuit Department, a bureau that employed astrologers to predict the locations of future terrorist attacks. According to the memo, this department has recently been shut down after one of its representatives was discovered to be passing official documents to an outsider.

The novel then flashes back several weeks, focusing on the Baghdad neighborhood of Bataween. The residents of Bataween included Elishva, an old woman who still hoped for the return of her son Daniel, who went missing while serving in the military during the Iran/Iraq War; Hadi, a junk dealer and storyteller; and Mahmoud, a young journalist. Hadi was mourning the death of his friend, Nahem Abdaki, killed in a car bombing several days before. After Abdaki's death, Hadi went to the morgue to claim his friend's body, only to discover body parts strewn all around the facility. Hadi took an assemblage of body parts and stitched them together so Abdaki's family would have something to bury, and then left the corpse in the courtyard behind his house. After another car bombing, Hadi found a nose in the rubble, the last piece he needed for Abdaki's body. Later, Hadi witnessed yet another car bombing when a garbage truck drove into a hotel gate, killing the guard inside, a man named Hasib Mohamed Jaafar. After the bombing, Hasib's soul drifted through the city seeking his body, and instead found the corpse in Hadi's courtyard. He inhabited the body and it became sentient.

Hadi told a group of people at a coffee shop about the corpse, including Mahmoud the journalist. Mahmoud worked at a magazine under an editor named Ali Baher al-Saidi, whom he viewed as a father figure. Mahmoud wished to be just like his mentor, and even developed a crush on the man's girlfriend. Meanwhile, the now reanimated corpse visited Elishva, and she believed it was her son Daniel, returned to her at last.

The next day, there were a series of murders in Bataween, and one of the victims was the local barber, the man who convinced Daniel to join the military, and whom Elishva blamed for her son's disappearance. Witnesses described the perpetrator as a hideous man with a “mouth like a gash across his face” (86). The Tracking and Pursuit Department began an investigation into the crimes, fronted by its leader, a man named General Majid. Hadi told Mahmoud that the corpse, whom he dubbed the Whatsitsname, visited him and explained that he was on a mission to avenge the deaths of the people whose various parts made up his body. Mahmoud gave Hadi his digital recorder and instructed him to conduct an interview with the Whatsitsname. Mahmoud then wrote an article about the creature. In response to the article, Brigadier Majid called Mahmoud's boss and demanded to know more about the Whatsitsname, but Saidi assured him the story was a hoax.

Hadi returned Mahmoud's digital recorder, now featuring a long monologue by the Whatsitsname about his recent troubles. On the run from the law, the creature hid in an abandoned building in Dora, a neighborhood in southern Baghdad. There he attracted numerous followers who believed him to be a messiah or harbinger of the apocalypse. The Whatsitsname discovered that, after avenging a death, he lost a body part and had to replace it with another, thus his mission could never end. He even began killing innocent people in order to keep his body intact. Eventually, his followers' ideological differences resulted in a war breaking out among them, and virtually all were killed.

Majid interrogated Mahmoud about the Whatsitsname, and told him where to find Hadi. Majid sent his men to Hadi's house, and when the junk dealer could not or would not give up the creature's location, Majid's men beat him. Back at the Tracking and Pursuit Department, Majid talked to his two psychics. The senior astrologer claimed he could locate the Whatsitsname, while the junior astrologer claimed he could actually tap into the creature's mind. Yet another car bomb was detonated in Bataween.

After an investigation into its unethical practices and leaked information, the Tracking and Pursuit Department was shut down. The junior and senior astrologers quarreled. The senior astrologer went to Bataween where he found the Whatsitsname, and informed the creature that he was being controlled by the junior astrologer, who wished the creature to kill him. The Whatsitsname nevertheless killed the senior astrologer, but the man died happy after looking into the creature's face. Mahmoud's boss Saidi fled the country and Mahmoud learned he was suspected of embezzling $13 million in American aid money. Disappointed in his mentor, Mahmoud returned to his hometown of Amara.

The novel's final bombing badly disfigured Hadi, and after being stitched up at the hospital, he resembled his creation. Facing intense pressure to find the murderer in Bataween, police arrested Hadi and claimed he was responsible. The people of the neighborhood celebrated the arrest in the streets as the Whatsitsname looked on from a window.

More summaries and resources for teaching or studying Frankenstein in Baghdad.