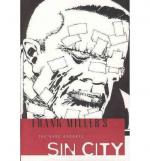 Frank Miller's Sin City: The Hard Goodbye tells the story of Marv, a psychotic, disfigured, ex-military killer living in a decadent and corrupt city. Marv is framed for the murder of beautiful prostitute Goldie, and feeling a connection with her though they only shared one night together, Marv goes on a search for her killer. Marv is both hunter and hunted as he traces the murder up through Sin City to a corrupt cardinal and a cannibalistic serial killer preying on the city's prostitutes. Marv ekes out retribution, though he pays for it in the electric chair.

As the story begins, Marv wonders to himself why the angelic Goldie would agree to sleep with him. He doesn't want to ask any questions, though, and destroy the little piece of heaven he's found in the hell that is Sin City. He gets drunk with her, makes love with her, and falls asleep with her. Three hours later, he's awake and Goldie is dead. Before Marv has time to process what's happened, he hears sirens in the distance. The cops are on the way. Marv fights his way out and disappears into the streets of Sin City.

Goldie is Marv's angel, the one woman who has been nice to him and given herself to him. He swears revenge on whoever killed her. He goes to his mother's house and retrieves his gun, and there he discovers that some men came around, asking about him. Marv knows that whoever set him up is probably looking for him, so he goes to a bar and spreads the idea that he's been getting drunk and babbling about revenge.

The next thing Marv knows, two assassins come after him. Marv tortures and kills them, getting the name of the person who sent him. They're too sloppy to be the murderer he's after, the one who killed Goldie. Marv finally follows the trail to a priest, and he thinks the name the priest gives him can't be right: Roark, part of the leading family of Sin City, and a cardinal in the church.

Marv follows the trail to a farm outside of the city, where he finds a serial killing cannibal, who eats women and keeps their heads as trophies. This is the man who killed Goldie, but he's also taken Marv's parole officer, Lucille, hostage and eaten her hand. Marv and Lucille escape, but unfortunately the cops come to the scene. Unsuspecting Lucille is killed by the corrupt cops, while Marv escapes.

On the track of more information, Marv finds Goldie's twin sister, another prostitute named Wendy. Together, they burn down the farm, and Marv kills the serial killer. Then, Marv moves on to Cardinal Roark's house. The cardinal confesses to finding a spiritual euphoria in cannibalism, along with the serial killer, and killing Goldie when she found out too much information. Marv tortures and kills the cardinal, but he is arrested, tried, and put to death for his crimes. He is forced to confess to killing not only the cardinal but also Goldie and the other prostitutes. Marv's only comfort before his death is that Wendy comes to him in jail, and he relives his night with Goldie with her sister.