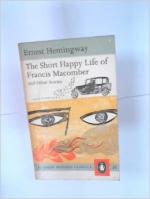 Hemingway's 1926 novel, The Sun Also Rises, like "The Short Happy Life of Francis Macomber," provides an examination of male-female relationships.

Hemingway's story "Hills Like White Elephants" also explores a dysfunctional relationship between a man and a woman.

"The Bear" by William Faulkner, written in the 1930s, is another hunting story that deals with the theme of nature. It takes place in the American South and outlines the complicated family roots of hero Ike McCaslin.

The "macho" tradition is given a new and interesting twist in Robert Bly's book Iron John, which spawned the men's movement of the late 1980s and early 1990s, encouraging men to bond together and return to their "masculine" roots.

One of Hemingway's predecessors, Stephen Crane, wrote The Red Badge of Courage (1895), a Civil War novel that has come to be known as a classic representation of...