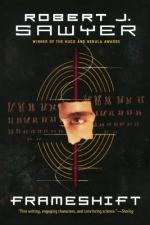 Robert J. Sawyer
This Study Guide consists of approximately 43 pages of chapter summaries, quotes, character analysis, themes, and more - everything you need to sharpen your knowledge of Frameshift.

In Frameshift by Robert Sawyer, Pierre Tardivel, a brilliant Canadian geneticist, goes to work for the Human Genome Project in Berkeley, California. His boss is Burian Klimus, a Nobel laureate and genetics researcher. Pierre meets and marries Molly Bond, an American working on her PhD in psychology at Berkeley. Pierre carries the gene for Huntington's disease, and he does not want to pass that to his offspring. The couple decides to pursue artificial insemination. They pick the 86-year-old Burian Klimus as the father. Pierre notices that Klimus bears a resemblance to John Demjanjuk, a Ukrainian and Nazi sympathizer, who was called Ivan the Terrible at the Treblinka death camp.

When their daughter Amanda is born, Molly and Pierre notice a few anomalies such as her hairy back and stocky build. When they figure out that Klimus has altered his DNA by inserting Neanderthal DNA into his sperm, both Molly and Pierre become enraged. Since Molly has an ESP-type ability to read minds, she can communicate with Amanda in a way others can't. Amanda may never actually speak because of a malformation of her throat caused by the Neanderthal DNA.

Pierre discovers that Condor Insurance of San Francisco, where he's applied for life insurance, illegally uses genetic screening to deny coverage to those deemed high risk. There is also some evidence that Condor secretly arranges to have some policyholders with chronic diseases murdered. As he looks deeper into the matter, he sees a connection between Condor founder Abraham Danielson and the Millenial Reich, a local hate group fashioned along the lines of the Third Reich. Danielson is not only a member of the Millenial Reich but also its founder. Pierre suspects Robinson is also a Nazi war criminal.

Pierre goes to Condor Life Insurance to confront Danielson with his criminal past as a Nazi and his criminal present as head of Condor, which has engaged in a long list of crimes from murder to fraud. At the time the 30-something Pierre confronts Danielson, he is hobbling along on a cane and considerably weakened in his physical condition because of his Huntington disease.

Robinson tries to flee by going to the roof of the building and hopping on a helicopter, but Pierre follows. When the helicopter arrives late, Danielson climbs aboard. Pierre hurls a heavy crowbar into the spinning rotors. The helicopter sputters, wobbles, and finally crashes from the high-rise building to the street below killing Danielson and everyone else on board.

More summaries and resources for teaching or studying Frameshift.