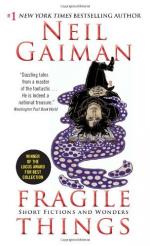 Plot Summary
+Chapters Summary and Analysis
A Study in Emerald, and The Fairy Reel
October in the Chair, and The Hidden Chamber
Forbidden Brides of the Faceless Slaves in the Secret House of the Night of Dread Desire, and The Flints of Memory Lane
Closing Time, and Going Wodwo
Bitter Grounds, and Other People
Keepsakes and Treasures, and Good Boys Deserve Favors
The Facts in the Case of the Departure of Miss Finch, and Strange Little Girls
Harlequin Valentine, and Locks
The Problem of Susan, and Instructions
How Do You Think it Feels? and My Life
Fifteen Painted Cards from a Vampire Tarot, and Feeders and Eaters
Diseasemaker's Croup, and In The End
Goliath, and Pages from a Journal Found in a Shoebox Left in a Greyhound Bus Somewhere Between Tulsa, Oklahoma, and Louisville, Kentucky
How to Talk to Girls at Parties, and The Day the Saucers Came
Sunbird, Inventing Aladdin, and The Monarch of the Glen
Free Quiz
Characters
Objects/Places
Themes
Style
Quotes
Topics for Discussion
Order our Fragile Things: Short Fictions and Wonders Study Guide

Neil Gaiman
This Study Guide consists of approximately 85 pages of chapter summaries, quotes, character analysis, themes, and more - everything you need to sharpen your knowledge of Fragile Things.

This detailed literature summary also contains Topics for Discussion and a Free Quiz on Fragile Things: Short Fictions and Wonders by Neil Gaiman.

Fragile Things is a collection of short stories and poems by Neil Gaiman, most of which deal with supernatural or strange events. Many of the stories carry an element or undercurrent of horror.

"A Study in Emerald" is a murder mystery set in Victorian London in an alternate past, in which the Old Ones, terrible monsters from beyond the Earth, have taken over the world. The narrator helps a detective, who is implied to be Sherlock Holmes, to solve the murder of one of these Old Ones. They track the crime to an actor and a doctor, who turn out to be the real Sherlock Holmes and Doctor Watson. They are outwitted by these 'criminals' who get away to fight the Old Ones another day.

"The Fairy Reel and Instructions" are poems that deal with the sinister and confusing nature of fairyland. Going Wodwo is a poem in which a person decides to cast off their life to return to nature.

"October in the Chair" is a story in which the months of the year tell each other tales. October tells the others about Runt, an overlooked and miserable boy who runs away from home and meets a ghost.

"The Hidden Chamber," "Bitter Grounds," and "How Do You Think it Feels" all deal with loss and painful memories. In "Bitter Grounds," the narrator has given up to the point where he becomes a zombie. He travels to New Orleans and gives himself over to the zombie Coffee Girls. In "How Do You Think it Feels," the narrator creates a magical Plasticine gargoyle to protect his heart.

"Forbidden Brides..." is set in a world in which horror clichés are normal everyday events, and what we consider normal is fantasy to them.

The "Problem of Susan" explores the girl who was left behind when all her family went to Narnia.

"Locks" explores the story of Goldilocks from a father's point of view, and "Inventing Aladdin" imagines Scheherazade's plight from One Thousand and One Nights.

The "Flints of Memory Lane" and "Closing Time" are two ghost stories that are claimed to be true, in which young boys witness something strange but never really find out the cause of it. "Good Boys Deserve Favors" also claims to be a true story, about a boy who mysteriously plays beautiful music on a double bass, before it breaks and he is never able to play it again. "The Facts in the Case of the Departure of Miss Finch" is another supposedly true story, in which the socially awkward Miss Finch is granted a wish by a magical cabinet in a circus, and disappears into a jungle world forever.

"Other People" explores the idea of what might happen to a person in Hell. In it, a man is tortured by a demon until he becomes a demon himself. Then, because time is fluid in Hell, he realizes that he is the demon who tortured himself. "In the End" reverses the story of Genesis, ending with humankind regaining paradise.

"Keepsakes and Treasures" is told by Smith, a bad man who works for an even worse man called Mr. Alice, who always gets whatever he wants. In this story, Mr. Alice pursues and buys one of the Shahinai, a mythical group of people who survive by selling one of their extraordinarily beautiful men every hundred years. Mr. Alice and Smith appear again in "Monarch of the Glen," in which Shadow, a character from the novel American Gods, is forced to fight Grendel. Shadow refuses to kill the creature, and manages to turn the tables on Mr. Alice.

"Strange Little Girls and Fifteen Painted Cards from a Vampire Tarot" is a collection of very short pieces exploring the lives of different kinds of women, and some popular vampire tropes.

"Pages from a Journal..." is an ambiguous story in which an unknown narrator searches for a mysterious woman called Scarlet.

"My Life" is a poem about a person whose life is a sequence of bizarre events like those found in the Weekly World News.

"Harlequin Valentine" is a story about the trickster Harlequin, who tries to court a woman called Missy by pinning a heart to her door.

"Feeders and Eaters" tells the story of an old woman called Miss Corvier who eats creatures alive in order to regain her youth. After killing her cat, the man telling the story gives himself to her to be her next victim.

"Goliath" is a story set in the fictional universe of the Matrix, in which a very tall man is taken from the matrix to pilot a ship to fight aliens.

"How to Talk to Girls at Parties" explores what happens when two Earth boys crash a party full of alien girls.

In "The Day the Saucers Came," the world comes to an end in a variety of different ways, but this is not noticed because the person is waiting for a phone call.

"Sunbird" tells the story of an Epicurean Club who are obsessed with eating new and interesting things. They capture and eat the Sunbird, which turns out to be the Phoenix. Eating its meat keeps one member alive for thousands of years. However, the others are not so fortunate, and are burned up from the inside and destroyed.