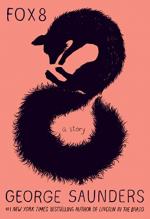 George Saunders
This Study Guide consists of approximately 22 pages of chapter summaries, quotes, character analysis, themes, and more - everything you need to sharpen your knowledge of Fox 8.

This detailed literature summary also contains Quotes and a Free Quiz on Fox 8 by George Saunders.

The story consists of a fox’s written recounting of recent events in his life. The Fox is named Fox 8. He first recounts learning to speak, read, and write the human language. For many nights, he sat outside a human home, and through the open window, he could see and hear a human woman reading stories to her children. One day, Fox 8 demonstrated his new abilities to Fox 7, a friend from Fox 8’s pack of foxes. Fox 8 then demonstrated his abilities to the pack leader, Fox 28. Soon after, humans destroyed the foxes’ forest to make room for a shopping mall. The foxes no longer had any source of food, as the destruction of the forest destroyed the ecosystem. The foxes became malnourished, and several of the elderly foxes in the group died. Fox 28 became depressed and ordered them all to simply stay together in the same location.

Fox 8 and Fox 7, realizing that they would all die if they did nothing, decided to venture into the mall to search for food for the pack. They snuck into the mall and were awed by its size and complexity. Several humans gave the foxes food, and the foxes departed in order to bring the food back to their pack. However, after they departed from the mall, the foxes were seen by two human construction workers. The two humans attacked the foxes and killed Fox 7. Fox 8 managed to escape, but he was deeply shocked and traumatized by the event. Fox 8 then saw that his pack was no longer where they had been. Fox 8 began to roam away from the location on his own.

He roamed for days. He did not find his pack, but he saw more examples of human civilization. He wondered why the humans, the most powerful species, also appeared to be the most destructive. Due to his traumatic experiences, Fox 8 felt that his ability to experience joy and happiness had become damaged. He eventually found a vibrant forest and a pack of happy, healthy foxes who accepted him. He had a good life there but still suffered from gloominess. When a female fox expressed the desire to have a family with him, Fox 8 decided, for the sake of his future offspring, to fight against his gloominess. He decided that in order to feel better, he would need some explanation from the humans about their destructive and aggressive actions. He decided to write a letter to the humans, and it is revealed that the text of story comprises the contents of the letter.

More summaries and resources for teaching or studying Fox 8.