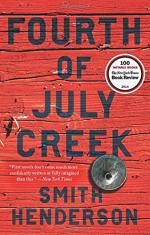 The novel's primary setting is Tenmile, Montana, in the early 1980s. Tenmile used to be a trading station named for its distance to a nearby mining town, which was ten miles away. It is a small town, with about 2,500 people living there, and its citizens are mostly uneducated, blue-collar people who work as loggers or at the nearby mill or mine. Children are expected to go to work as soon as they can, and education isn't a priority. The locals seem distrustful of outsiders, particularly those who are educated, like Pete. They also tend to mind their own business and try not to get involved in other peoples' problems. The town is near enough to the forest that wild creatures, like moose and bears, often wander in and wreak havoc.

As remote as Tenmile is, the Pearls' camp is even more remote, located deep...