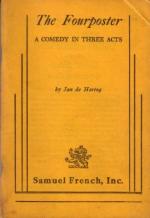 Additional Resources for The Fourposter by Jan de Hartog

Jan de Hartog
This Study Guide consists of approximately 49 pages of chapter summaries, quotes, character analysis, themes, and more - everything you need to sharpen your knowledge of The Fourposter.

Astro gives an introduction to the major works of Beckett, with discussion of the Theater of the Absurd, as well as central themes and stylistics elements of his plays.

This text provides a history of the treatment of Jews in the Netherlands during Nazi occupation of World War II.

Moorton's book is a collection of essays by various critics discussing the significance of O'Neill to the development of twentieth-century American theater.

More summaries and resources for teaching or studying The Fourposter.

The Fourposter from Gale. ©2005-2006 Thomson Gale, a part of the Thomson Corporation. All rights reserved.