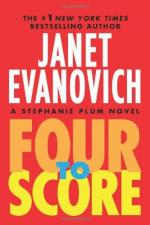 Janet Evanovich
This Study Guide consists of approximately 42 pages of chapter summaries, quotes, character analysis, themes, and more - everything you need to sharpen your knowledge of Four to Score.

This detailed literature summary also contains Topics for Discussion and a Free Quiz on Four to Score by Janet Evanovich.

Four To Score is the fourth in the Stephanie Plum series. In this installment, Stephanie is looking for Maxine Nowicki, a woman arrested for stealing her boyfriend's car. Through the course of trying to find Maxine, Stephanie finds herself being stalked by some woman who has accused her of stealing a man's affections. As a result of this stalking, Stephanie moves in with Morelli, her childhood boyfriend. Now Stephanie finds herself in the middle of chaos and has no idea how to find her way out. Four To Score is an amusing, if at times tense, novel of accidental adventure that will leave Evanovich's fans begging for more.

Stephanie is angry with her cousin, Vinnie, for hiring Joyce Barnhardt to work for him as a bounty hunter. To get her off his back, Vinnie gives Stephanie a new case. This case involves a woman named Maxine Nowicki who failed to appear in court after being arrested for stealing her boyfriend's car. The first place Stephanie goes is to the boyfriend's house to see if he has heard from Maxine. The boyfriend, Eddie Kuntz, tells Stephanie he has not heard from Maxine, but that Maxine has some love letters of his that he would like back. Kuntz asks Stephanie if she would bring Maxine to him before she takes her to jail in order for him to retrieve his belongings. Stephanie agrees when Kuntz offers to pay her.

Stephanie then goes to the diner where Maxine was a waitress and gets the name of her closest friend. Stephanie goes to visit the friend and discovers she has badly injured her hand and is no longer working. However, the woman has no information on Maxine. Stephanie then goes to visit Maxine's mother and finds an unpleasant alcoholic who is belligerent and unwilling to help. The trail then appears to come to an end until Kuntz tells Stephanie that Maxine threw a brick through his window with a message on it. The message is in code. Stephanie asks around her building for anyone who might be able to decode the message and is sent to the nephew of one of the tenants, a man who is supposed to be really good with puzzles.

Stephanie goes to Salvatore Sweet's apartment and finds a man in drag. Sally Sweet plays in a bad full of cross dressers with his roommate, Sugar. Despite being odd, Sally is very good at codes and he deciphers Maxine's code in a matter of minutes. After the first code leads to another, Stephanie returns to Sally and asks that he continue to decipher the codes. Sally readily agrees on condition that Stephanie allows him to tag along on some of her bounty hunter related outings. Stephanie agrees. The codes lead Stephanie and her newly formed team on a wild goose chase that appears to be done with the intention of humiliating Kuntz. However, none of the clues led Stephanie to Maxine's whereabouts.

A few mornings later, Stephanie goes out to her car to continue interviewing Maxine's friends and neighbors only to find that someone has doused her car with gasoline. A note tells Stephanie that she has gotten too close to someone's boyfriend and this person wants her to back off. Stephanie automatically assumes the boyfriend mentioned in the note is her childhood friend, Joe Morelli and is instantly annoyed at him for putting her in such a situation. However, this situation does not stop Stephanie from her job.

After following up on another lead on Maxine, Stephanie and Lula, her sometime partner, return to her building to find Mrs. Nowicki waiting for them. Mrs. Nowicki, who has recently suffered a terrible scalp injury, tells Stephanie that her daughter has moved on to Atlantic City and that she should leave her alone. When Mrs. Nowicki is done talking, she discards her cigarette beside Stephanie's car and the car explodes. Later that night, after returning from Atlantic City where she nearly caught Maxine, Stephanie finds that someone has firebombed her apartment, nearly destroying it.

Stephanie moves in with Morelli because of all her friends and relatives she figures he is the only one she does not mind putting into danger. However, this move complicates their relationship because they are attracted to each other but Stephanie knows that Morelli cannot provide the type of commitment she would like to have. At the same time, this situation leads Stephanie to learn that Morelli is working on a counterfeit case that might have something to do with her case. Stephanie takes this information and uses it to track down Mrs. Nowicki. Soon afterward though, Kuntz disappears. Stephanie goes to his home to see if there is some clue to his whereabouts. When Stephanie finds nothing on Kuntz's side of the duplex, she goes into the other half, hoping his aunt might have left some clue out where she can find it in regards to Kuntz's disappearance. What Stephanie finds it the dead body of Morelli's counterfeiter.

Stephanie's case blows wide open when Kuntz's aunt and uncle return home and confess their role in the counterfeiting ring. Soon after Stephanie finds out that Maxine is on the way to the airport. Stephanie catches up to her just in time to take the arrest from Joyce. With the case over, Stephanie is able to concentrate on her personal life, but realizes a relationship with Morelli is not something she wants to consider too closely just yet.

More summaries and resources for teaching or studying Four to Score.