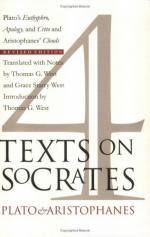 This detailed literature summary also contains Topics for Discussion and a Free Quiz on Four Texts on Socrates: Plato's Euthyphro, Apology, and Crito and Aristophanes' Clouds by Thomas G. West.

Socrates (469-399 B.C.) is widely considered to be the founding father of philosophy, and while there were a handful of 'pre-Socratic' philosophers, Socrates lived a philosophical life of such power and influence that after his death, philosophy would become a widely accepted practice in the West, lasting until the present day. While much of what we know about Socrates comes from the dialogues of his student, Plato (another of history's great philosophers), historical inquiry suggests that much of what Plato has Socrates say is genuine and that we can learn something of the great man's life and character from these records (among others). Socrates was a citizen of Athens who lived a life without material possessions and creature comforts in order to spend his days in Athens engaged in the study of philosophical topics, particularly through dialoguing with others and asking penetrating questions of the Athenian elite. Ultimately this practice of leading 'the examined life' infuriates the Athenian people so much that they decide to execute him, making Socrates the great martyr of philosophy.

Four Texts on Socrates contains four of the most important documents ever written about Socrates. All are dialogues of one form of another. Socrates never wrote down any of his views, so all the writings concern Socrates from the perspective of another. The first three dialogues are written by Socrates' famed student Plato, whereas the fourth is written by the famous Greek satirist Aristophanes. Plato was a stronger defender of Socrates, whereas Aristophanes was a critic, so distinct pictures of Socrates come through the texts.

The first dialogue, the Euthyphro, is a dialogue between Socrates and an acquaintance named Euthyphro. Their conversation occurs in a government office, where Euthyphro plans on prosecuting his father and Socrates plans to stand trial for corrupting the youth and impiety. Both are thought to be impious by Athenian society at large, and so Socrates asks Euthyphro what piety consists in, after which Socrates systematically shows Euthyphro that he has no idea what piety is. The next dialogue, the Apology, is an account of Socrates' trial for corrupting the youth. Instead of a dialogue between two individuals, the Apology occurs in front of a number of people, particularly an Athenian jury. Socrates gives three speeches in his defense, one before the jury deliberates, one on behalf of a lighter sentences and the final a defense of his actions and ideals after being condemned to die. The speeches largely consist in criticizing the morays of Athenian society against the philosophers' ideal of the pursuit of truth. The third Platonic dialogue, the Crito, occurs while Socrates is in prison. A friend of Socrates', Crito, comes to encourage Socrates to escape; in response, Socrates argues that he is duty bound to obey Athenian laws and that death is nothing to fear. Finally, in The Clouds, Aristophanes presents a dramatic play that mocks Socrates by painting him as an atheist with perverse moral views. The play is a comedy and is so funny that it labels Socrates as an impious corrupter of the youth even twenty-four years after its first performance, at Socrates' trial.