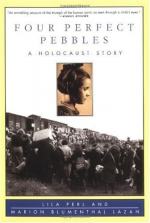 Lila Perl
This Study Guide consists of approximately 21 pages of chapter summaries, quotes, character analysis, themes, and more - everything you need to sharpen your knowledge of Four Perfect Pebbles.

This detailed literature summary also contains Topics for Discussion and a Free Quiz on Four Perfect Pebbles: A Holocaust Story by Lila Perl.

Four Perfect Pebbles is the memoir of Marion Blumenthal Lazan's experience as a child during the Holocaust. When Hitler rose to power, this young Jewish family, Marion, her father Walter, her mother Ruth and her brother Albert were stuck in Nazi Germany despite trying to escape. No one expected Hitler to rise to power in the 1920s but as his political message of Germany economic recovery and anti-Semitism caught on, they became concerned. When Hitler became Chancellor, discrimination against Jews began in earnest and the Blumenthals' family store was quickly boycotted, forcing Walter to sell his products to customers in the countryside. As the situation worsened, the Blumenthals wanted to leave Germany, but they could not abandon Marion's grandparents until they died. Thus the Blumenthals stayed in Germany until it was nearly too late to escape. They applied for visas to enter the United States but they were not granted permission to travel in time to save them.

The family eventually made it to Holland where they lived in a refugee camp for a few years but when Holland was occupied by the Nazis, life quickly worsened. Their refugee camp turned into a transit camp that sent Jews and other minority groups to the death camps, including Westerbork in Holland. Eventually they were forced into the Bergen-Belsen death camp in Germany where they lived for two years, struggling to survive disease, starvation and murder. While the family remained alive, they were deeply traumatized. As Germany started to lose World War II, the Blumenthals were moved further in Germany and more and more Jews were killed. They were placed on a "death train" for two weeks before they were liberated by the Russians. Afterwards, they lived in the East German city of Trobitz, where they lived off of abandoned food and shelter. Confined there for several months due to a typhus epidemic, a third of the population of Jews died, along with Walter, Marion's father. Soon thereafter the remaining Blumenthals were released.

Marion, Albert and Ruth returned to Holland where they waited for three years to acquire permission to emigrate to the United States. Moving several times in New York City, a Jewish organization responsible for Holocaust refugees sent them to Peoria, Illinois where Ruth, Albert and Marion gradually got on their feet emotionally and financially. In the end, they flourished, Albert and Marion married and Marion ended up with three children and five grandchildren. When the book was finished, Ruth was still alive and Marion had been speaking about her experiences during the Holocaust for fifteen years. The book was written by Marion with the help of writer Lila Perl. In the epilogue, they report that both Marion and Albert were able to return to their former homes in Germany and visit their father's grave.