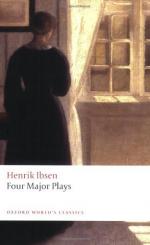 Henrik Ibsen
This Study Guide consists of approximately 56 pages of chapter summaries, quotes, character analysis, themes, and more - everything you need to sharpen your knowledge of Four Major Plays.

This detailed literature summary also contains Topics for Discussion and a Free Quiz on Four Major Plays by Henrik Ibsen.

The four plays in this collection (A Doll's House, Ghosts, Hedda Gabler and The Master Builder) are the most well known and frequently produced, of the many plays written by the late 19th Century Scandinavian dramatist Henrik Ibsen. While entirely individualized in terms of characters and situation, all explore common themes - the role and place of women, their varied struggles for freedom, the inability to escape the past, and the importance of public perception.

The first play, A Doll's House, centers around the character of Nora, a pretty, vivacious and somewhat naïve young woman married to Torvald, an ambitious bank manager with very clear ideas of how people in general, women in particular, and his wife in the specific particular, should behave. Nora has borrowed money from a private money lender in order to help her husband, but when she discovers how negatively her husband feels about people who borrow money (and when the money lender attempts to blackmail her), Nora is forced both to confront the darker sides of those she trusts and her own innocence. In one of the most famous final moments in theatrical history, Nora leaves her home and marriage, slamming the door on her innocence, her past, and her children.

In the second play, Ghosts, the central character is Mrs. Alving, the respected widow of a well-regarded military hero. As construction on an orphanage built to honor her husband's memory draws to a close, she discovers that her son (Oswald), her protégé (Regine), and her confidante (Pastor Manders) all believe that Captain Alving was the kind of man who should be honored in such a way. Tired of sustaining a life of lies, Mrs. Alving reveals how morally reprehensible her husband truly was - that he continued having affairs after his marriage, and that Regine is the illegitimate offspring of one of those affairs. Since Regine is being pursued by Oswald, she becomes particularly upset at the revelations. When Oswald reveals that he is suffering from a debilitating disease, passed down to him by his father who himself contracted it as the result of his debauched life, Mrs. Alving is left with nothing but the choice of whether to help her son die.

In Hedda Gabler, the third play in the collection, the central character, Hedda Gabler, has just returned home from her honeymoon with a man who already bores her. When a visit from a former best friend and current rival informs her that a former lover has come to town, Hedda takes steps not only to bring him back into her life, but for him to transform his own life into something she wants it to be. She is also propositioned by an opportunistic friend of the family and pressured by her weak-willed husband to be pleasant to his well-meaning but domineering family. When all her plans backfire and her former lover ends up killing himself, Hedda discovers she is trapped in a life she doesn't want to live and also takes refuge in suicide.

In the final play, Solness, the "master builder" of the play's title, feels threatened by the rising brilliance and ambition of his assistant, Ragnar. He also suffers intense remorse because of his role in triggering the lingering depression of his heartbroken wife, Aline. The arrival of a young woman, Hilde, whom Solness had met several years before changes his life completely. She has sought him out in order to have him fulfill his promise to create a castle, a home, and a life for her. At Hilde's urging, Solness takes an increasingly daring series of risks, finally succumbing to her determination that he climb a newly-constructed tower in triumph as he had done when they first met. Solness, however, suffers from vertigo and, before the eyes of Hilde, his wife, and his protégé, falls to his death.