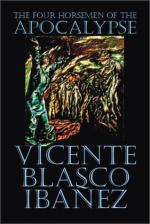 The Four Horsemen of the Apocalypse Setting & Symbolism

Vicente Blasco Ibáñez
This Study Guide consists of approximately 60 pages of chapter summaries, quotes, character analysis, themes, and more - everything you need to sharpen your knowledge of The Four Horsemen of the Apocalypse.

Marcelo, in his quest to buy every bargain in France, buys a bathtub made out of gold and puts it in his castle. This bathtub is why Marcelo decides to go to the castle when he learns the German forces are coming toward Paris.

While Julio and his father are on the outs, Argensola often goes to Dona Luisa to request objects that Julio can sell for income. Dona Luisa gives Argensola wine bottles which he stores in the studio. Marcelo also gives wine from his wine cellar to the French soldiers retreating past his castle before the battle of the Marne.

Paintings of the Soul

Argensola also fancies himself a painter who can paint the souls of people in their eyes, a trick he attempts to teach Julio.

It is in the Garden of Chapelle Expiatoire that Julio...