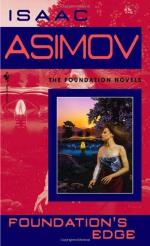 Isaac Asimov
This Study Guide consists of approximately 57 pages of chapter summaries, quotes, character analysis, themes, and more - everything you need to sharpen your knowledge of Foundation's Edge.

This detailed literature summary also contains Topics for Discussion and a Free Quiz on Foundation's Edge by Isaac Asimov.

FOUNDATION'S EDGE looks at the Milky Way Galaxy halfway through the timeline of the Seldon Plan, as ambitious rulers of the First and Second Foundations vie for total control. The reclusive people of Gaia, who share a common mind, arrange a rendezvous and leave it to intuitive protagonist Golan Trevize to decide the Galaxy's future.

Golan Trevize, a brash freshman, First Foundation Councilman, is exiled from Terminus for treason, for claiming that Hari Seldon's analysis made 500 years earlier matches the current situation too perfectly to be authentic. Trevize and an older companion, Professor Janov Pelorat, are ostensibly to search the great Library on Trantor for information on the mythical planet Earth/Gaia, while, in fact, Trevize is to locate the Second Foundation, which Branno believes is manipulating the Plan. She is unaware that Trantor is home to the Second Foundation and that Councilman Munn Li Compor, Trevize's betrayer whom she orders to follow him, is a Second Foundation agent, managed by the ambitious Second Foundation Speaker Stor Gendibal.

Gendibal, too, believes that some mentalic force is tinkering with the Seldon Plan, but before he can share his analysis with the Table, he is waylaid by thugs, rescued by a woman, and impeached by his colleagues. Sura Novi's smooth mind proves that someone has been tinkering with exquisite subtlety. Gendibal is acquitted and sent to investigate Trevize, taking Novi along as a mental "early warning system."

Trevize pilots the advanced Far Star to Sayshell, where they learn the few facts and many myths that surround Gaia and decide on a risky visit. Trevize is put off by the Gaians' claims of sharing a common mind and particularly by Pelorat falling in love with a young Gaian, Bliss. She accompanies them into orbit, where they face off with First and Second Foundation spaceships, and Trevize is told he must use his intuition to decide among three alternate plans for the welfare of humanity.

As proponents chorus "Free will!" "Guidance and peace!" and "Life," Trevize chooses the "Galaxia" plan because it alone has a long-range framework, allowing modification and correction. Determined to resume his search for Earth, Trevize is concerned that Pelorat wants to remain behind, having fallen in love with Bliss. Trevize intuits she is a robot, confronts her, and secures a promise to be good to the kindly old professor without admitting that she is a robot.

More summaries and resources for teaching or studying Foundation's Edge.