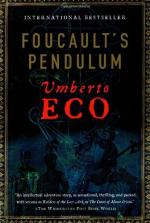 Umberto Eco
This Study Guide consists of approximately 46 pages of chapter summaries, quotes, character analysis, themes, and more - everything you need to sharpen your knowledge of Foucault's Pendulum.

Foucault's Pendulum is a novel that follows the adventures of three book editors in Milan as they attempt to unravel the great mystery of the Knights Templar. They eventually get sucked into an underground occult world of secrets and magic where the Plan they have developed becomes more powerful than they could have ever imagined.

The novel begins with the main character and narrator, Casaubon, hiding in the Conservatoire des Arts et Metiers in Paris to try to find his kidnapped friend Belbo. Years ago when Casaubon is still a graduate student in Milan, Belbo and Casaubon talk to a Colonel Ardenti, an ex-fascist and Templar fanatic, who claims to have a secret Templar message. Casaubon, at the time, is working on a dissertation about the Templars so Belbo consults him about Ardenti's document. Initially taking the colonel to be a lunatic the two men are intrigued once they learn that Ardenti has, apparently been murdered.

Years go by and Casaubon, now with his degree and teaching in Brazil, meets a mysterious man named Aglie who claims to be the immortal Comte de Saint-Germain. Casaubon strike up a friendship with Aglie and reintroduces himself to the mysterious gentleman once he relocates to Milan. Back in Milan, Casaubon runs into Belbo again who tells him about strange coincidences related to the Templar message of Ardenti's. Intrigued, Casaubon and Belbo start looking into the Templars and the occult once again. Casaubon is hired on to work with Belbo at Garamond press as a researcher.

Belbo and Casaubon devise an ingenious way to spend their spare time at Garamond that involves feeding bits and pieces of manuscripts submitted to the Press on occult subjects into Belbo's computer, Abulafia, and trying to interpret the results. This game leads to the creation of the Plan, what Belbo and Casaubon call their explanation of the text that comes out of Abulafia. The Plan eventually grows into a complete occult history of the world that claims the Templars, in their more modern guises, are plotting to take over the world by harnessing the power of underground telluric currents. In the meantime, Aglie has been hired on as a consultant to Garamond Press for a series of books they are doing on the occult.

Belbo becomes engrossed by the Plan, devoting all of his time to it. In a fit of jealousy because he believes Aglie to be a romantic rival, Belbo tells the entire plan to Aglie and claims to have the secret Templar map that will allow its holder to gain control of the telluric currents. Aglie, apparently the leader of a secret society of his own, frames Belbo as a terrorist and forces him to travel to Paris where Aglie kidnaps him. Casaubon, witnesses Belbo's murder in the museum where Belbo is hanged from the Pendulum because he refuse to give up the location of the nonexistent map. Casaubon escapes from the museum and returns to Italy. He goes to Belbo's childhood home where he believes he will be killed by Aglie's secret society.

More summaries and resources for teaching or studying Foucault's Pendulum.

Foucault's Pendulum from Gale. ©2005-2006 Thomson Gale, a part of the Thomson Corporation. All rights reserved.