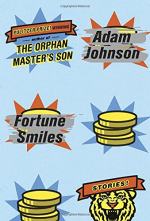 Adam Johnson
This Study Guide consists of approximately 36 pages of chapter summaries, quotes, character analysis, themes, and more - everything you need to sharpen your knowledge of Fortune Smiles.

“Fortune Smiles” is a collection of six short stories by Adam Johnson which recounts the stories of people in unusual situations in life. In “Nirvana,” the narrator tends to his wife, Charlotte, who has been temporarily paralyzed following a bad flu. To help keep her mind off of things, Charlotte listens to Nirvana for hours at a time. Her husband, meanwhile, develops a code that allows him to generate a holographic image of a person. The narrator generates the image of the recently-assassinated President to ask him about life, death, and marriage. The narrator is worried that his wife may try to commit suicide. He ultimately programs an image of Kurt Cobain to talk to Charlotte and keep her company. Charlotte tells the projection of Cobain that he should not commit suicide, that it would hurt her too much.

In “Hurricanes Anonymous,” Randall “Nonc” Richard, a UPS deliveryman, is stunned to discover in the days after Hurricane Katrina that his ex-wife has dropped off their son in his truck and disappeared. Nonc and his girlfriend, Nelle, care for the child and begin planning a life together while Nonc tries to find out what happened to his ex-wife. At the same time, Nonc receives word that his father is dying of cancer out in Los Angeles after having stolen Nonc’s car to get out there. Nonc comes to learn his ex-wife has been arrested for being involved with a drug dealer who used her phone to transact a deal. Nonc makes peace with his father over the phone, and decides on a new start with Relle, beginning by visiting his father in LA.

In “Interesting Facts,” the narrator is a breast cancer survivor who struggles to adapt after having her breasts removed. She has a difficult time believing and accepting that her husband could still find her sexually attractive, and that her husband doesn’t want to be with anybody else. She asks him how long he would wait to love again if she died, but he responds that this will never happen because they will both die together. The narrator comes to realize she has drifted too far from her family, and needs to reconnect with them.

In “George Orwell Was a Friend of Mine,” Hans is the former administrative head of the dreaded Hohenschonhausen Prison, which has been converted into a museum. Hans, divorced, lives just down the block and is angered to learn that tourists are being told that torture was carried out at the prison when Hans believes no such thing ever occurred. Hans participates in a tour in which he challenges the assertions of Berta, a former inmate-turned-guide, pointing out that what she calls an isolation room was in reality a janitorial closet, or that dousing prisoners with water cannot be considered torture. Hans insists on proving it by putting himself in place of a prisoner and having water poured on him, during which time he thinks back on life in East Germany before the end of the Cold War.

In “Dark Meadows,” the narrator works as an IT repairman and is known among child pornography makers and users as the man to be in touch with should there be an issue. The narrator himself was raped as a child, and now walks a strange line between right and wrong. He assists child porn users in destroying their files, but also encodes the files to make them easier to locate. He submits the master code to the police which will put all such users on a map for purposes of justice. Meanwhile, the narrator is both sexually attracted to the young girls who live next door to him.

In “Fortune Smiles,” DJ and Sun-ho are North Korean defectors now living in South Korea. Though thrilled to be away from the dictator, both are having a difficult time adjusting to life in a free South. Sun-ho especially misses a girl from the North named Willow. He frequently attaches gifts to balloons to send across the DMZ more as a gesture than actual hope that Willow will receive them. Sun-ho ultimately becomes too melancholy without Willow, so he secures dozens of large balloons to a lawn chair and decides to fly himself back across the DMZ.