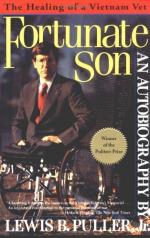 Lewis Burwell Puller Jr.
This Study Guide consists of approximately 57 pages of chapter summaries, quotes, character analysis, themes, and more - everything you need to sharpen your knowledge of Fortunate Son.

The author mentions several times in the book that some people believed, at least initially, that death would have been more merciful for Puller than having to live on in his condition. What are your feelings regarding these comments?

Given the political climate of the time, do you believe that Puller's status as a Vietnam vet helped him or hurt him in his run for office? Explain your position.

Had Puller lost his legs in a war which had more public acceptance, such as World War II, do you think it would have been easier for him to come to terms with his injuries?

Do you believe the harshness of life in a wheelchair would have been any easier for Puller to accept if he had managed to outshine his father's military prowess prior to being disabled? Why or why not?

More summaries and resources for teaching or studying Fortunate Son.