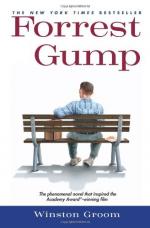 Winston Groom
This Study Guide consists of approximately 75 pages of chapter summaries, quotes, character analysis, themes, and more - everything you need to sharpen your knowledge of Forrest Gump.

This detailed literature summary also contains Topics for Discussion and a Free Quiz on Forrest Gump by Winston Groom.

Forrest Gump by Winston Groom is a memoir of a "halfwit" in the 1960s-70s whose life is not "like a box of chocolates" but is not at all hum-drum.

Forrest Gump has an IQ of about 70, but realizes that he is smarter than a lot of "normal" people. He escapes "special school" by growing big and strong enough for football where he makes the All State team and is recruited by Coach Paul "Bear" Bryant of the University of Alabama. There Forrest meets Bubba, who teaches him to play harmonica, and the instrument changes Forrest's life. Forrest flunks out, is immediately drafted, messes up at Ft. Benning, GA, and arrives in Vietnam in time for the Tet Offensive. For rescuing his mortally-wounded friend Bubba, Forrest is awarded the Congressional Medal of Honor. Recovering from a minor wound, Forrest meets Lt. Dan, whose philosophy about natural laws change Forrest's outlook on life. In Washington, DC, Forrest enjoys the President's hospitality but during a recruitment lecture ad libs that the war is "a bunch of shit."

Winning the Army's ping-pong tournament, he is sent to Beijing, where he rescues Chairman Mao from drowning. After an early discharge, Forrest finds Jenny, joins her band, becomes her lover, starts smoking marijuana, and loses Jenny. In a Washington, DC, antiwar protest, Forrest is arrested for assault, confined for psychiatric observation, "discovered" by NASA, and sent on a mission to Mars. With bristly Maj. Fritch and an orangutan, Sue, he waits four years for rescue when they land in New Guinea amidst cannibals and head-hunters. Forrest learns chess from the chief, Big Sam. After another White House visit, Forrest runs into Dan and they find Jenny in Indianapolis. A wrestling promoter convinces Forrest to join the lucrative business. As The Dunce, he becomes popular, but loses his money, Jenny, and Dan.

After an interval of professional chess and movie-making in Los Angeles, CA, Forrest and Sue go to Bubba's home town, start a small shrimp farm that grows enormous and profitable. Forrest hires many whom he has met during his adventures. Talked into running for the U.S. Senate, Forrest backs out when newspapers dig into his past. In Savannah, GA, Forrest becomes a famous one-man band, meets Jenny and her son, Forrest, Jr. He settles with Sue in New Orleans, contemplating the better life that Jenny and his son have without him and satisfied that his own life has never been "hum-drum."

More summaries and resources for teaching or studying Forrest Gump.