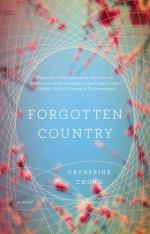 Chung, Catherine
This Study Guide consists of approximately 43 pages of chapter summaries, quotes, character analysis, themes, and more - everything you need to sharpen your knowledge of Forgotten Country.

The following edition of this book was used to write this study guide: Chung, Catherine. Forgotten Country. Riverhead Books, 2012. Hardcover.

A note about names: the first-person narrator of the book is alternately referred to by her actual first name, Jeehyun, and her Americanized name, Janie. Since the book jacket copy refers to this character as “Janie,” this study guide will also primarily refer to this character by “Janie” as well.

A college student, Janie, learns that her two parents are moving from their family’s established home in Michigan, back to their home country of Korea. Janie’s younger sister, Hannah (or Haejin) has recently disappeared from her college in Chicago. The family learns, through Hannah’s friends, that she had intentionally run away, and is currently in a safe location in California, but they are unable to learn any other details. Janie’s parents are moving back to Korea because, coincidentally, this is where the foremost cancer treatments in the world are taking place. Janie tells her parents that she will put her graduate math studies on hold in America in order to move to Korea with them.

The impending move causes Janie to reflect on many elements of her family’s history, which is tied into the tumultuous political history of Korea. For instance: Janie’s maternal grandmother had been incredibly disappointed when both Janie and Hannah turned out to be girls. Also, Janie’s parents had initially moved to America when Janie was a child because they feared legal consequences when her father anonymously authored an explosive political pamphlet. Janie also recalls, when her family had just moved to Michigan, her aunt (dad’s sister) and her two sons, Gabe and Keith, came for an extended visit from their new home in Indianapolis. Gabe and Keith were both older than the sisters Janie and Hannah, and basically acted as bullies throughout the entire time, destroying Hannah’s favorite doll during a brief moment when all parents were out of the house.

Janie tracks down Hannah in Los Angeles and then goes to visit her. In a tense conversation, Janie discovers that Hannah has simply changed colleges and resumed her studies in California, saying that she needed to establish her own identity by creating distance between herself and their parents. Janie lies to Hannah by saying that their parents have effectively disowned her.

Janie flies straight from Los Angeles to Seoul, where she is picked up by her uncle and taken to the forested outskirts of the city, where her parents have established themselves in a warm and cozy house. For many weeks, her father’s condition dramatically improves, as he meets with old friends and relatives and gardens with Janie. When they visit the doctor one day, they discover that his cancers are actually shrinking.

Eventually, Hannah agrees to fly out to Korea to join the rest of her family. On another trip to the doctor’s office, the doctor tells the family with unnecessary rudeness that his cancers are now growing in size. After weighing their options, the family makes the difficult decision to take Janie’s father off of chemotherapy, hoping that he will improve with an all-natural treatment. At this time, Janie’s aunt (who has since moved back to Korea from Indianapolis), comes to the house to lecture her brother (Janie’s father) that he has wasted his life by not dedicating himself to Christianity. Her presence greatly frustrates Hannah, and when the sisters confer later that night, Janie is surprised and horrified to learn that Gabe had in fact molested Hannah during their visit long ago. For some reason Hannah still places blame on Janie for not knowing this had happened.

The day before the family is scheduled to go to a large firefly festival, Janie’s father’s condition dramatically worsens, as he vomits while in bed and is unable to stand up. After he is checked in to the hospital, Janie decides that she must quickly return to Chicago for a week in order to meet with the advisor for her PhD thesis. However, when she arrives, the advisor invites her to a dinner at his house that turns out to be intimate and candle-lit, and then the advisor proceeds to hit on her. Janie is frustrated by this development but makes the bizarre decision to continue asking him for help that same night.

When Janie returns to Korea, her father has grown dramatically weaker. Each visit with distant family members, or each conversation among Janie, Hannah, and their mother, now becomes an intense argument. The family decides that, with Janie’s father approaching his last days, they should move him from the hospital to his distant childhood home, which is in a deeply rural area. A few days after making the journey, Janie’s father quietly passes away. However, even as preparations are made for the wake and funeral, the bickering does not stop among the family members. On the day when Janie is due to fly back to the United States, she walks over to her father’s gravesite, which is in a quiet corner in the forests around his childhood home. Janie finds that Hannah is already there, and they quietly watch the sun rise together.

More summaries and resources for teaching or studying Forgotten Country.