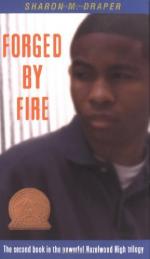 Sharon Draper
This Study Guide consists of approximately 32 pages of chapter summaries, quotes, character analysis, themes, and more - everything you need to sharpen your knowledge of Forged by Fire.

This detailed literature summary also contains Topics for Discussion and a Free Quiz on Forged by Fire by Sharon Draper.

As the story opens, Gerald is three years old and living with his mother, a volatile drug addict named Monique. Gerald has already learned to read his mother's moods and is careful not to do things he knows will anger her. He is fully aware that she often gets drugs from a man named Leroy. Though he is helpless to do anything about her addiction, he wants to. One day, Monique leaves Gerald at home alone, saying that she's going to find Leroy. Gerald has a new toy - a G.I. Joe action figure. He amuses himself by playing with the toy and it's obvious that he has an active imagination. When he discovers a lighter Monique had lost, he remembers that she'd once used the flame to burn his hand in an effort to show him that he should never play with lighters. But he is overcome by temptation and soon has mastered creating the flame, which adds to his game with his toy. When he sets the kitchen on fire, he realizes he's in trouble and runs to the living room to hide. A boy in the building who knows Monique often leaves Gerald alone rescues him and he's taken to the hospital.

Gerald's great-aunt Queen steps in and takes custody, though she's older and confined to a wheelchair. She has soon created an atmosphere of love and shelter that changes Gerald's life. Six years pass before his mother arrives on his birthday. She has a daughter with her, a little girl named Angel who was born while Monique was in jail, and her boyfriend, Jordan Sparks. Monique says she wants Gerald to live with her but Gerald refuses. However, when Aunt Queen dies of a heart attack he has no choice.

Gerald soon forges a solid bond with his sister, though he hates Jordan Sparks for his violent temper. When Gerald learns that Jordan is molesting Angel, he confides in the father of a friend who helps get the police involved. Jordan is arrested and the lives of Gerald and Angel improve, though Monique is uncaring and Gerald is left with the day-to-day chores of the household and is responsible for Angel. Angel learns to dance and Gerald becomes a member of the basketball team for the next six years until Jordan's release. The story comes to a climax as Gerald steps in to keep Jordan away from Angel. The two fight and Jordan dies in a fire. Gerald and Angel barely escape, and it takes this brush with losing her children for Monique to realize what kind of man Jordan really was.

More summaries and resources for teaching or studying Forged by Fire.