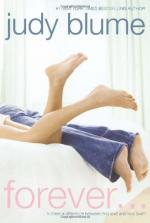 Judy Blume
This Study Guide consists of approximately 35 pages of chapter summaries, quotes, character analysis, themes, and more - everything you need to sharpen your knowledge of Forever....

"Forever..." is a young adult romance novel by Judy Blume.The story of "Forever..." is a universal tale of first love, adolescence, and the struggle towards self-discovery. Katherine Danziger is not alone on her journey and has friends and family that consistently help her along the way. Katherine comes from a loving, supportive family. Her parents and grandparents are open about everything from love, sex, and relationships to life experiences and mistakes. They want their daughters and granddaughters to know about life in order to be able to make sensible, informed decisions. Throughout the novel, Katherine’s parents help to guide her through the journey to self-discovery and offer her the advice and information that she needs to make wise decisions. As Katherine goes through the normal adolescent journey toward self-discovery, she meets Michael Wagner, who becomes her first love and ushers her into the world of romance and intimacy. Michael and Katherine throw themselves into the excitement and romance of their relationship and it is this relationship that builds up Katherine’s confidence and begins her preparation for adulthood. Through her relationship with Michael, Katherine slowly learns to take command of her own life. She learns to take control of her destiny, make decisions for herself, and accept the consequences for her actions and decisions.

When she first meets Michael, Katherine has no definite plans for her life or understanding of her own identity. In the middle of her senior year in high school, Katherine goes to a friend’s New Year’s Eve Party and is immediately attracted to Michael Wagner just as he is immediately attracted to her. The next day he returns to the friend’s house under the pretense of collecting his records and asks Katherine to spend some time with him. It is not long before they are spending their every available moment with each other. Michael has been sexually active while Katherine has not and as their relationship progresses Katherine is continually having to set boundaries around their physical intimacy. Katherine also discovers that the first time Michael had sex, he got a venereal disease. While Michael is not pushy or demanding, he makes it obvious that he wants a physically intimate relationship and Katherine feels pressured. As Katherine contemplates a sexually intimate relationship with Michael she and her friend Erica debate the nature of sex. Erica argues that sex is simply a physical act and not a romantic one, while Katherine sees sex as an emotionally loaded action that can result in greater intimacy between the participants. The question of birth control and protection is also an issue in the novel. Katherine’s mother and grandmother both provide her with literature and information that helps her realize the seriousness of sex and allows her to make an informed decision. Katherine’s grandmother works with Planned Parenthood and Katherine goes to Planned Parenthood of New York when she plans on entering a sexual relationship with Michael.

But Katherine and Michael’s relationship is not just about sexual intimacy. Through her relationship with Michael, Katherine works towards self-discovery. At the beginning of the novel she had no ambitions or goals in life. She planned to go to whatever college accepted her. During her relationship with Michael, she begins building her life around him and making plans for the future around his dreams and plans. She adopts his interests and throws herself completely into his life. Katherine’s parents are understandably concerned by this development, but Katherine is very defensive. Eventually, as Katherine begins to realize how much her parents care for her she slowly begins to see that they have a point. Towards the end of the novel, Katherine and Michael are separated by summer jobs in different states and Katherine realizes that in fact, her parents were right. She finds out that she is too young to plan on spending the rest of her life with someone and she slowly comes to realize that there is a balance between thinking that the future will take care of itself and having every detail of the future planned. She realizes that she has to take control of her own life and make decisions based on her own dreams. With the death of her grandfather, Katherine comes to understand that life must be lived fully and that she has her whole life ahead of her to have a serious relationship. Ultimately, Katherine realizes that she is simply too young for a forever relationship and that her relationship with Michael is just a stepping-stone in her life journey. However, she knows that she will always cherish her time with Michael, which helped her to embrace and discover her identity as a young woman.

More summaries and resources for teaching or studying Forever....