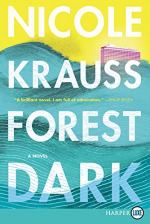 Plot Summary
+Chapters Summary and Analysis
Chapter 1 - "Ayeka"
Chapter 2 - "Out in the Blue"
Chapters 3-4 - "Every Life is Strange," "Packing for Canaan"
Chapters 5-7 - "Is and Isn't," "Kaddish for Kafka," "Gilgul"
Chapters 8-10 - "Forests of Israel," Something to Carry," "The Last King"
Chapters 11-13 - "To the Desert," "Lecha Lecha," "Already There"
Free Quiz
Characters
Symbols and Symbolism
Settings
Themes and Motifs
Styles
Quotes
Order our Forest Dark Study Guide

Krauss, Nicole
This Study Guide consists of approximately 53 pages of chapter summaries, quotes, character analysis, themes, and more - everything you need to sharpen your knowledge of Forest Dark.

No one could have imagined it, and yet it came to seem like a fitting end. Death was too small for Epstein. In retrospect, not even a real possibility. In life he had taken up the whole room. He wasn't large, only uncontainable.
-- Narrator re: Jules (Ayeka)

Importance: This is an effective introduction of Jules' character, as the reader is told that all his life Jules has had a big personality, a personality that could not be contained by death. From the beginning, Jules' disappearance is seen as some sort of supernatural event, as if he simply became too large for the earthly plane of existence.

...he sometimes felt his lungs inflate, as if his body was remembering what it had been necessary to forget, in order to believe in the grandness and uniqueness of the things that happened to one, which could mark life the way a new combination of letters could be impressed...
-- Jules (Ayeka)

More summaries and resources for teaching or studying Forest Dark.