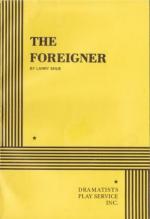 Many critics of The Foreigner imply that the play has only "commercial" appeal, that it is not much different from the typical television sitcom. Compare Shue's play with one or more of your favorite television sitcoms and argue for or against this assertion.

Some critics of The Foreigner claim that the play reduces southerners to "politically incorrect" stereotypes. Investigate the way southerners are portrayed in both serious literature and in popular entertainment, comparing these treatments with Shue' s portrayal of Betty, Catherine, Ellard, David Lee, and Owen.

Klanwatch, a branch of the Southern Poverty Law Center, has monitored Klan and other hate group activity since 1981. By the late-1990s, Klanwatch was aware of over 400 racist...