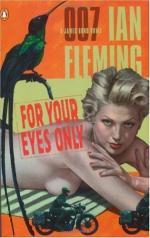 For Your Eyes Only - Chapter 3, Quantum of Solace Summary & Analysis

Bond is conversing with the local governor in Nassau, the capital of the Bahamas. Bond was sent there to stop gun runners smuggling weapons to Castro in Cuba, and he's leaving the next day. Before leaving, though, he has to endure a post-dinner party conversation with the governor. The two men have nothing in common.

Bond throws out the remark that, if he ever marries, he'll marry a stewardess and be pampered all the time. The remark is untrue and basically meaningless, but it sparks a note of interest in the governor. He offers to tell Bond a tale, if it won't bore him, and Bond acquiesces because he'd rather listen than make conversation. The governor begins his story.

Phillip Masters is a quiet, socially awkward young man who becomes a civil servant. He takes his first...

(read more from the Chapter 3, Quantum of Solace Summary)

For Your Eyes Only from BookRags. (c)2023 BookRags, Inc. All rights reserved.